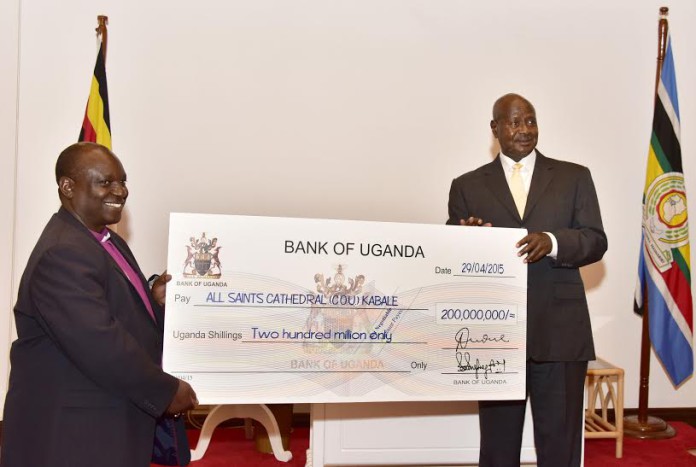 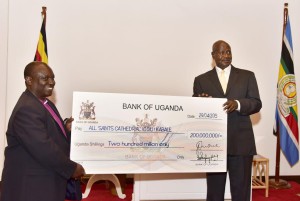 President Museveni commends Christians in Kabale for initiating self
help community projects saying development projects generate income
for the Church and promote continuity and enhancement of God’s work.
He announced a government contribution of Shs200million towards the
construction of All Saints’ Church, in Kabale district which, when
completed will also run a Primary and Nursery school.
The President was recently meeting the Bishop of Kigezi Diocese, the
Rt. Rev. George Bagamuhunda and his delegation, who called him at
State House, Nakasero to brief him on the progress of the construction
project.
The delegation included the Prime Minister, Rt. Hon. Dr. Ruhakana
Rugunda, the Chairman of the Construction Committee, Mr. Benjamin
Mayanja; Archdeacon Erikana Tugyenda, the Chief Church Warden, Mrs.
Jenina Kabakiraho and Mr. Matama, a member of the committee.
The President acknowledged efforts by the people of Kabale, who raised
over Shs2 billion on their own, for project and said this will enable
the Church have an income and serve Christians better.
Bishop Bagamuhunda told the President that at the time the project was
first conceived, it had been estimated to cost Shs2 billion but due to
various factors, the construction is now expected to cost Shs.3
billion. When completed, the church will comfortably accommodate 4,000
people.
The Bishop said currently, the construction works are at the roofing
stage with over Shs2 billion so far spent largely from the collections
of the Christian congregations and from individual donations.