Your Excellency, the President of the UN General Assembly,

Your Excellency, the Secretary–General of the United Nations,

Your Excellencies Heads of State and Government,

Your Excellencies, Heads of Regional and Sub-Regional Organizations,

This year, 2015, marks the 70th anniversary of the founding of the United Nations. When the UN was created, many of our countries did not exist as independent countries. In Africa, Ethiopia and Liberia were the only sovereign countries on the continent. While there have been some modest reforms in the UN since its creation in 1945, most of the fundamental structures that were created after World War II by the victorious powers, such as the powers conferred upon the Permanent Five countries in the Security Council, remain unchanged.

Chapter VIII of the Charter of the United Nations provides for cooperation between the UN and Regional Organizations. Despite this, it reserves the right for the UN Security Council to authorize enforcement action. However, the crucial decisions of international peace and security, within the Security Council, are mostly taken by the veto-wielding members. This is a big mistake and has already caused alot of harm to Africa, like in the case of Libya where Africa’s opinion was ignored; hence, the present massive human haemorrhage in that area. If the Security Council members that took military action in Libya had listened to the voice of Africa, the present chaos in Libya, Nigeria, Mali, the people who are dying in the Mediterranean sea from the African shores trying to get to Europe, could have been avoided. In fact, Gaddaffi’s Libya used to employ many workers from Africa.

To talk about strengthening cooperation, between the UN and regional and sub-regional organizations, one has got to start by re-examining the structures of the whole UN itself and change some of the old fashioned ones to conform with the current realities. Uganda strongly believes that for genuine cooperation to occur between the UN and regional and sub-regional organizations, reform of the UN in general, Security Council in particular, is imperative. This, in the long run, will help us, collectively, to prevent the use of the UN for national or group interests of the powerful members to undermine the efforts of regional organizations and of peace in the world. 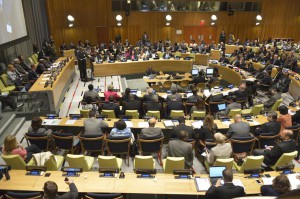 In the meantime and as we strive to reform the UN into a modern and relevant organization that serves all its members based on sovereign equality as embedded in its Charter, the starting point for cooperation is that we need to reaffirm the Principle of Complementarity envisaged in Chapter VIII of the Charter as the basis for building and strengthening cooperation between the UN and regional and sub-regional organizations.

The United Nations should, therefore, respect processes that are undertaken by the regional organizations especially in areas of conflict resolution. While we abhor impunity, the UN approach that usually, superficially and without proper contextualization, emphasizes justice in instances of conflict resolution at the expense of long term peace, is manifestly self-defeating. In this regard, the UN should not just blindly pursue the option of placing sanctions on individuals or referring them to the ICC without holding consultations with the regions affected as this often undermines the very process of resolving the conflict in question. On the other hand, where the UN has worked in consonance with regional or sub-regional organizations, there have been tangible positive results as is the case in Somalia and Burundi. Many of the conflicts are results of distortions and mistakes of long duration, endogenously and exogenously authored and perpetuated. Therefore, last minute high-handed interventions without a thorough understanding of the dynamics of the situation are wrong and injurious to the hapless populations of the concerned areas.

Secondly, we need to harmonize our understanding of what complementarity entails. This, in our opinion, means the recognition that both the UN and regional organizations have various strengths and weaknesses and hence the need to complement rather than supplement each other’s roles in the areas of conflict prevention, mediation, resolution, peacekeeping and peace-building.

Thirdly, from Uganda’s and, indeed Africa’s, perspective, complementarity also entails sharing the burden of maintaining international peace and security, consultative decision-making and respect for regional processes, as well as division of labor based on comparative advantage.

Mr. President,
Many on the African continent and elsewhere have come around to agreeing with what Uganda and other African patriots have been advocating for, for long: African solutions for African problems. The international community, including the UN, can only support and should, therefore, respect regional processes. You are all aware of the long period it takes the UN to deploy in a crisis situation. The process from initial consultations, to a “zero” draft resolution, through several rounds of negotiations on actual drafts to a final resolution authorizing any form of action, can take agonizingly long to come through. That is if one or more of the Permanent Members with veto power does not use it to block the process. Some crises situations are such that an immediate and robust response is required. This can best be done by countries in the region. Such a situation occurred in December 2013 in South Sudan and the UN Security Council is still debating the issue up to now!!!! If we in the region had not acted when we did quickly, the region could possibly have had another genocide. The neighbouring countries could have stopped the genocide of Rwanda in 1994. We could not do it because the UN was obstructing us.

Uganda, therefore, strongly supports the establishment of the African Capacity for Immediate Response to Crises (ACIRC) which is an African owned initiative for rapid military intervention as and when the need arises, to quickly respond to crisis situations on the African continent. We believe, support to this mechanism will strengthen the international community’s resolve to deal with crises that threaten international and regional peace and security.

In situations where actual deployment by the UN has been taken as in Eastern DRC, the mandate of the mission is often so restricted that you end up with a “sitting duck” mission with troops in a “peace-keeping” role with no peace to keep. What we need in Africa is support from international community in terms of funding and equipment so that we can do the job ourselves. It is true that due to the phenomenon of colonialism and neo-colonialism in Africa, many of our countries still face challenges of ensuring peace for their nationals because they do not build capacity. Therefore, in cases where the national army and security forces fail to guarantee peace, the region can step in and only be supported by the international community, including the United Nations. I refer to this arrangement as the Trinity; that is to say the internal stakeholders, the region and the international community.

Where this has happened as in DRC with the internationally supported Intervention Brigade from contiguous African States, the results have been positive to some extent. Support for an African rapid response force would go a long way in strengthening cooperation between the UN, regional and sub-regional organizations.

Mr. President,
I have already referred to the support to the regions by the UN. The major challenge in addressing regional and sub-regional issues whether in peace and security, humanitarian response or regional integration and economic development, is inadequate resources. Most of the African countries have instituted reforms which have seen the region as a whole registering some of the fastest economic growth.

However, in the long run, we shall need partnerships with the international community, including the UN, to develop our own capacities. To demonstrate our resolve to address these challenges, Uganda strongly supports the African Union’s commitment to increase the proportion of the cost of AU peace operations covered by its Member States. This is in addition to contributing about 45% of the UN’s uniformed peacekeepers.

On the other hand, since the UN has the duty to support regional organizations as provided for in the Charter, Uganda supports the use of UN assessed contributions to support regional-led peace operations, based on the fact that the UNSC retains the primacy for the maintenance of international peace and security. This is because Uganda believes that the use of funding mechanisms like Trust Funds, while helpful in the short run, are unreliable and unpredictable since they are based on voluntary contributions.

We also believe that strengthening cooperation between the UN and Regional and Sub-regional Organizations, will greatly benefit the implementation of Post-2015 Development Agenda. On account of the leverage they have with their respective constituent member countries, regional and sub-regional organizations provide useful fora for policy coordination and harmonization on various ongoing important multilateral processes, including the Post 2015 Development Agenda, climate change, the WTO Doha Round, among others. They are also central in coordinating the implementation of the outcomes from these multilateral processes at their appropriate levels.

Regional and sub-regional organizations are at the centre of promoting cooperation and integration in areas such as trade and investment, infrastructure development, critical sectors including agriculture, energy, water, security, etc. as well as fostering private sector partnerships.

I cannot end my comments without making two final points. One point is the question of ideological disorientation. This entails the misdiagnosis of social, political or economic issues and acting on the basis of the misdiagnosis, especially with the use of force ─ regular or irregular.
In the past, that ideological disorientation manifested itself in the form of imperialism and colonialism. They caused so much damage to societies and peoples. The colonized peoples rose up and, after great sacrifices, defeated the overt aspects of imperialism and colonialism. Today, one of the forms of ideological disorientation is sectarianism of religion, tribe or, even, clans and chauvinism of gender and, sometimes, of race. This ideology of sectarianism and chauvinism is a pseudo ─ ideology that tries to promote the issue of identity in such a manner that it eclipses the very people’s legitimate interests of economic exchange, interaction and shared prosperity. Most of the time, they even mis-define identity on opportunistic and an irrational basis where the actors wish to remain “big fishes in small ponds” as one of our leaders once said. Many of the conflicts in the world are authored, promoted and fueled by this ideological disorientation. We cannot only deal with the consequences but not look at the causes. Some parts of the international community have been able to blacklist what they call anti-Semitism. Why can’t something be done about sectarianism and chauvinism? How can we hobnob with sectarianisms and chauvinists and then talk about global peace when these pseudo ─ ideologies are the causes of the very conflicts we are talking about?

The second point is the discipline and, indeed, orientation of the international forces, the regional forces or the local forces the UN system uses or relies on to keep or enforce peace. Uganda had become a failed State by the 1970s and 1980s. we were only able to rescue it by assaulting ideological disorientation mentioned above and dealing most harshly with indisciplined soldiers that loot people’s property, rape and defile women, take sex-slaves or commit homicide. If the UN system, the regional forces or those acting under us are not able to handle the question of discipline, we shall become part of the problem and not part of the solution.

Yoweri Kaguta Museveni
PRESIDENT OF THE REPUBLIC OF UGANDA