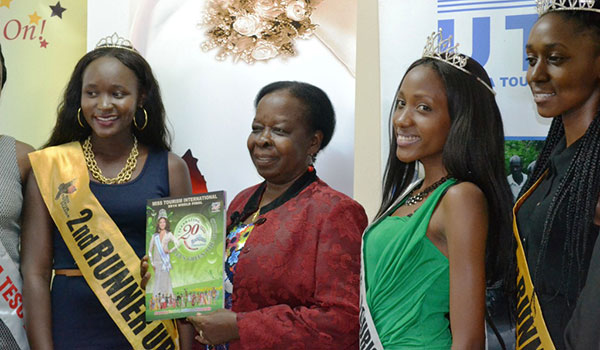 The Ministry of Tourism, Wildlife and Antiquities in conjunction with the Uganda tourism board has today launched the third edition of the annual Miss Tourism beauty pageant, 2015.

Speaking at the launch held at the ministry headquarters, Maria Mutagamba the minister for Tourism and Wildlife attributed a few positive reasons why they carry out this pageant.

“Apart from just promoting the tourism sector, this undertaking also brings the girl child to the limelight,” she said adding, “We therefore call upon all stake holders,bmedia fraternity and Uganda at large to promote this cause because it benefits the entire country.”

The competition
This year’s competition is under the theme, Celebrating Uganda’s Cultural Diversity. This will see a total of 33 contestants from various regions of the country that make up the 11 target clusters. These will participate in countrywide auditions that have already kicked off in their different clusters.

All contestants will undergo a rigorous training both at regional level and at three week national boot camp which is aimed at transforming the finalists to impart them with knowledge about tourism, conservation and prepare them as tourist ambassadors.

The previous Miss Tourism beauties have represented us well, for example in competitions in Kuala Lumpur and at Miss Heritage International. This has helped promote our tourism industry abroad,” the minister noted.

With weekly elimination, 11 contestants will vie for the grand finale that will be held on 28th August 2015 at Kampala Serena Hotel where President Museveni is expected to be the chief guest. From here, the top three winners will go on to represent Uganda at various international competitions.

The Minister also dropped a massive hint on a possible opportunity for Uganda to host the international Miss tourism pageant later this year, “We sent a request to the organizers and we received a confirmation. So hopefully, we shall take up this opportunity,” Mutagamba added.

It should be noted that this is the third contest of a kind to be organized by the ministry in a long-term bid to promote tourism in and out of the country. The contest has over the years of its existence seen vibrant and ambitious young women become tourist ambassadors of Uganda with the recent and current one being Miss Patricia Babirye Ntale .