The United Nations Secretary General Ban Ki-Moon has appealed to President Yoweri Museveni to help avert the deteriorating situation in Burundi and restore peace in the central African country. He also urged the Ugandan leader to try and bring the two warring factions in the South Sudan conflict to negotiate conclusive peace agreements for the country.

Ban Ki Moon and President Museveni met on the sidelines of the UN High Level Thematic Debate on UN cooperation with Regional and Sub-Regional Organisations in the maintenance of global peace and security for development. The two leaders also discussed regional issues covering Somalia and the Democratic Republic of Congo -DRC. 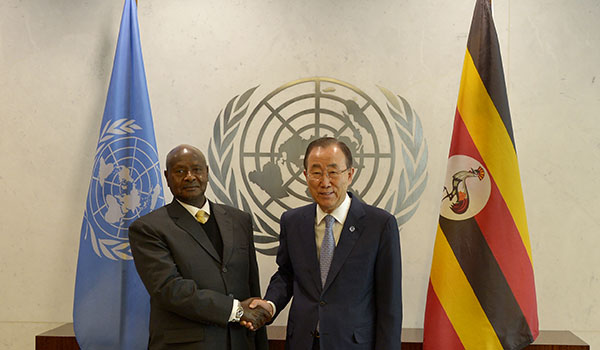 In response President Museveni told the Secretary General that the Al Shabaab in Somalia has largely been defeated in towns but still roam the rural areas and called for more deployments in order to contain them.

The meeting was also attended by the UN General Assembly President Sam Kutesa, the Minister of State for Foreign Affairs Mr Okello Oryem and Uganda’s Ambassador to the to the United Nations Dr. Richard Nduhura.

The President Museveni also held discussions with the Swedish Secretary of State for Foreign Affairs Mr. Annika Soder, focusing mainly on who the situation in Somalia.