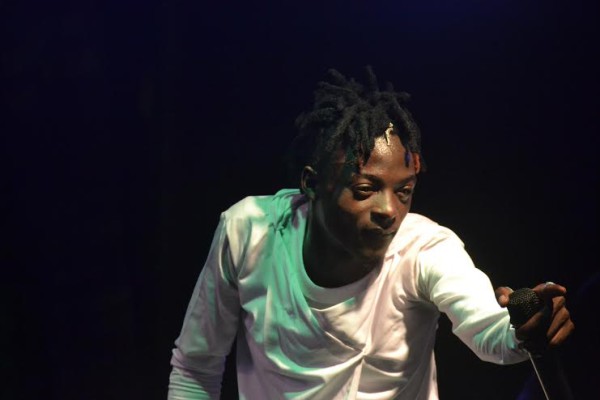 Oh Khalifa Aganaga promised his fans the show of their lives, he even went ahead to say that his voice was now perfect for a live performance.
At the same time, photos of him practicing with a band flooded social media; preparations were indeed in high gear! And yes, if you did not expect the best out of Aganaga’s first ever concert, it would simply be an ingrate.
Dubbed Nassanga Guddy Guddy Gal, the show which was held in the parking lot of the Bakuli based Ambience club, left many with nothing remarkable to write or think about, perhaps the endless sound glitches.
Though the show kicked off very few people, the opening acts warmed up the audience. These included artistes like RemaNamakula, Mun G, Red top, Obsessions Africa, minayo and many others.
Later on, the long awaited artiste,emerged from the audience like a ‘Heavenly king’ draped in a white robe that fully covered his body, Aganaga sat atop a pearly white chair and belted out lyrics from Minakonda, one of his older songs.

As muscle men carried him and his chair like a true king ready to be worshipped, his loyal subjects, the fans, screamed his name in delight.
Their ululations however died on their lips because the moment he joined the live band on the stage, every thing went downhill. They were barely audible! The revellers in the back sits who could not take it any more began to chant, “Tetuwulira”meaning “we are not hearing”.

With his hard-to-define music genre, it was hard for the band to keep up. One minute we were dancing to Afro beat, the next to reggae and then dancehall. He nevertheless perfomed songs like Mikono wagulu, ekitangaza and Ndabirawa.
His audience which mostly comprised of regular people did not appreciate live band music. They kept asking Aganaga to sing the real songs that they are used to. With the things went, Aganaga has clearly not understood his fan base.
Later on the sound went off completely and Aganaga was forced to go back stage. People kept on asking for refund of their money since the show had at that point flopped but the MCs kept on calming them down as the sound was being fixed.
After it was fixed, Aganaga curved in to the audience’s demands. The live band was put away and he came back in a new style. This time, dressed in Black, he tried to perform the dancehall music that the fans wanted.
“Sound can’t stop me!” he shouted to the now visibly excited fans. He called for unity in the music industry saying that he has no quarrel with any artiste as he invited his longtime friend, Coco Finger who gave him one glove and remained with one as a sign of one love.