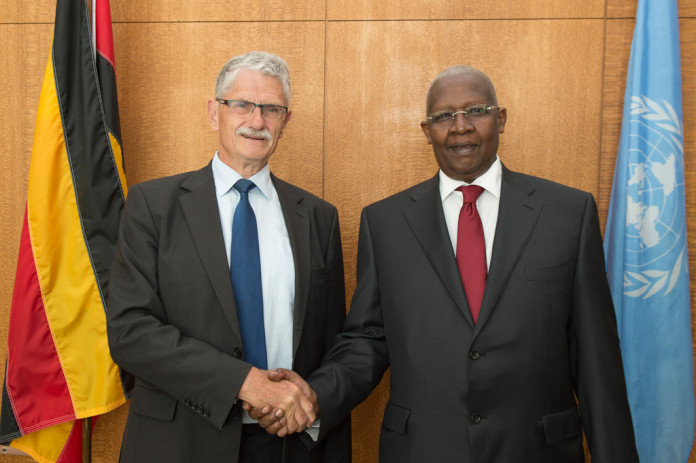 The UN has elected Mogens Lykketoft as the new General Assembly President, to replace Sam Kahamba Kutesa, the fourteenth African to hold the prestigious but largely ceremonial office.

According to a UN release, the 70-year old Lykketoft, a former Danish minister who had stints at both foreign affairs and finance, and then as Speaker of Parliament, will assume office in September.

His his election on June 11, 2015 caused a lot of excitement particularly in Africa, where he was the continent’s unanimous choice. However, he also came under attack by pro-gay activists who wanted his election thwarted.

A seasoned politician and lawyer, the 65-year old Kutesa has been Uganda’s foreign affairs minister for 10 years and during his stint at the UN his State Minister Henry Okello Oryem temporarily took over his ministerial duties.

Meanwile, while delivering his acceptance speech, the UNGA President-elect for the 70th Session pledged to lay emphasis on the pillars of the UN Millennium Goals.

“What is now in front of Member States is the final stretch towards adopting a universal, people-centred, transformative development agenda that addresses the struggle of our lifetime,” … “When implemented, it will enable us to eradicate poverty while keeping climate change at bay, building resilience, and creating inclusive and sustainable economic growth,” he was quoted saying.

He further stressed that he would primarily set his targets on action, international peace and security, and improved human rights, and also hinted at reforms in the UN Security Council, ‘particularly ahead of the selection process for the next Secretary General’.

“Today’s decision-makers must acknowledge that 2015 is the time to make a new commitment to action for the sake of generations to come,” Mr. Lykketoft stated adding: “We will have to find ways to achieve sustainable growth, where the distance between rich and poor nations and peoples does not become larger but smaller. Where we not only create development and eradicate extreme poverty but also deliver a more equitable access to and distribution of global goods.”

Outgoing UNGA President Kutesa told his successor and other delegates that member states would ‘adopt an ambitious and transformative post-2015 agenda’ with keen focus on climate change, under the UN Framework Convention on Climate Change (UNFCC).

“We could not have a better leader in His Excellency Mr. Lykketoft,” Mr Ban Ki Moon said and added: “we can act so the United Nations lives up to its historic ambitions for this year and helps secure the long-term future of our world.”

A 193-member body, the United Nations General Assembly elects a chairperson on an annual basis, and holds sessions between September and December.