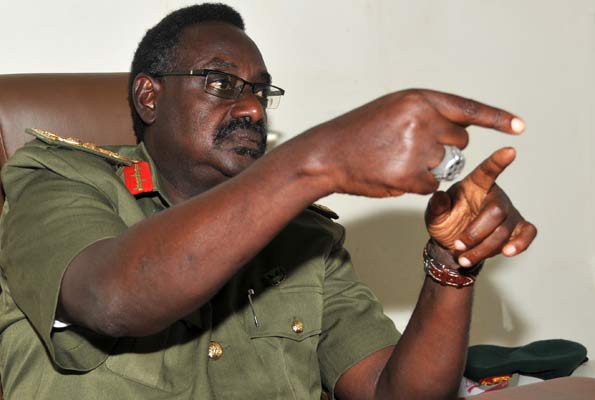 Police today picked up a full general like they would a tomato vendor accused of eloping with IGP Kale Kayihura’s relative in downtown Kampala. Gen. David Sejusa was detained at Jinja Road Police Station on charges Frying Pun is not interested in knowing. Our interest was in talking to the man himself.

“Thanks for agreeing to meet us, General. But first things first: You and the IGP are bush war comrades. Even the other serving generals like Elly [Tumwine] and Katumba Wamala just couldn’t arrest you like that. While in the act, why didn’t you speak to them and you settle the matter on the spot instead of having yourself dragged here?”

Sejusa chuckled and looked around the room that smelt of muck and grubs as if to survey for some bugs. He then said: “Who says they are the ones who arrested me? I think you got your tip wrong. It’s these boys here who brought me here for a mug of tea. Do I look like I have been arrested?”

“Well, if you were not arrested, what we know is that you are being detained currently,” the Pun said. “I had expected to find full generals who delivered you here around but all I hear is that it is Seya coming to help secure your release. What is not going on here?”

“It’s these boys who brought me here and I am waiting to know exactly why,” he said.

“So you mean these weather-beaten chaps… I mean, cops, have the powers to arrest a full general and detain him at a police station?” Pun went on. “Did Museveni approve your resignation from the military?”

“It’s not how it works everywhere. Uganda is not the US. In an ideal world, only full generals deserve the right to arrest me,” Sejusa said. “Even Kayihura wouldn’t dare. But in Museveni’s regime, it’s about the end justifies the means. But this too shall pass. Can you imagine these lumpens say I, David Tinyefu… sorry, Sejusa, a full general, was wrong to allow a few boda boda cyclists follow me from the bank toward Entebbe? I was in my car, I wasn’t on the bodas, neither did I give them fuel…”

“So you are saying the current regime knows no protocol and a full general can just be heckled by some diaper-clad Evelyn Anite, should I also assume that the whole drama for which you are here is meant to divert attention from the storm Amama Mbabazi has caused?” we asked.

“I don’t know about that,” he replied.

“But people are apprehensive of you. You seem to be the only one who believes you have left the system you helped bring and entrench in power with the viciousness of a mother slapping a mosquito that tried to land on her baby’s butt. A case in point was how the country ignored your arrival from Sembabule to Kampala…”

“That is why Ugandans will not defeat Museveni,” the feared general said. “People don’t know what they want in life or government for that matter. But that will not stop us from continuing with the determination to remove Museveni and his recurrent failures from government.”

“General, I dare you to back Mbabazi openly…”

“Who is Mbabazi?” he asked, not hiding his scorn. “If that man offers something tangible, something different from Museveni, I will consider it. Mbabazi is a joke. A big joke.

“So what exactly is your game? This arrest, the public feels, was just another of those explosive things that happen to divert attention. No one actually believes a general can be picked up like a cabbage and dumped at this rundown police station. You would at the army mess in Makindye, not here,” we said.

“My game plan? To fight for democratic ideals, the ideals for which we sacrificed in the bush. But at the end of the day, I have to recognize the fact that these boys couldn’t just put a hand cuff on me. They have no right and the powers to do so, even if they brought me here. That is why I have been giving them orders. Do I look like I am under arrest?”

“No, but you sure are in detention at the moment. So, when does Sejusa, the former Tinyefuza, announce that he is running for the presidency?” Pun asked.

“Presidency is not everything. It’s about good leadership, not ‘who-is-in-leadership’ as many of you think,” Sejusa said.

The Frying Pun is a parody column