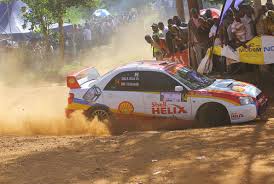 Renowned for its calm and clean environs, Fort Portal, hosting a motorsport event for the first time in three decades, will wake up to roaring noises from the monster machines and hordes of rally fans.

There is also the exciting pair of Desh Kananura and Adam Essa, who are yet to post worthwhile results despite boasting of super machines in Subaru New R4 and Mitsubishi Evo IX respectively.

Kananura’s R4 is the latest rally machine output from the Subaru WRX series, replacing its Impreza N classes. According to various internet websites, Kananura could have splashed between Euros 60,000 and 80,000 (approximately Shs 221 million and 295 million) on the new machine.

Dr Ashraf will unveil his new acquisition in the Subaru Impreza N14 during the rally. The 2008 champion has upgraded from a Subaru N12B. The 2011 champion, Susan Muwonge, will compete for the first time this season.

The hugely-popular Super Lady has been out of action for sometime, citing lack of sponsorship and tight work schedule at her teaching job. Also returning to the cockpit after a long while is 2010 champion Nasser Mutebi, who had taken time off rally activities to concentrate on his private businesses.