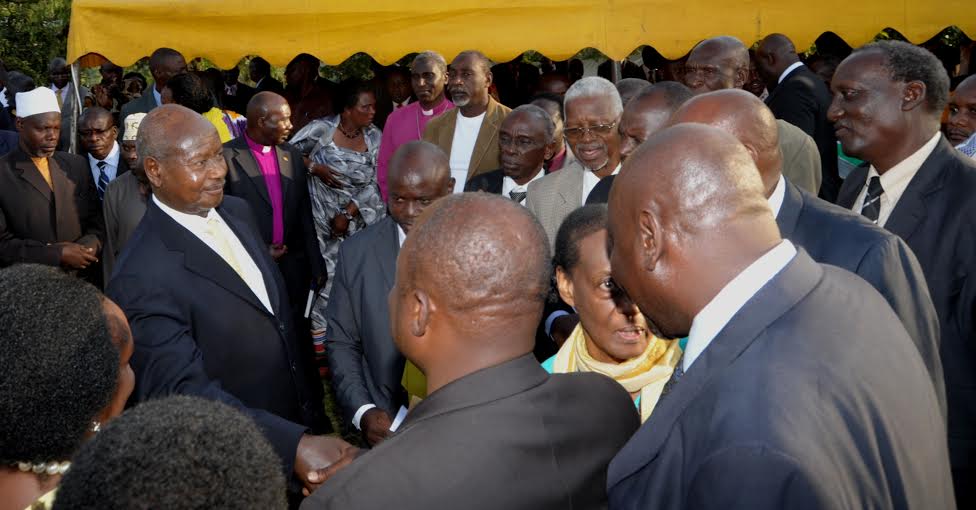 President Museveni with some members of the Tooro Community who attended a meeting to try and find a solution to the conflicts in the Kingdom.

“I propose that you appoint a tribunal of religious leaders who are known to be neutral in this matter. You should utilize the talent of talking and listening to others and to each other,” the President cautioned following a heated meeting that he called to try and resolve the conflict.

His proposal was unanimously supported by the Tooro Kingdom stakeholders who immediately appointed Bishop Robert Muhiirwa of Fort Portal Catholic Diocese, the Anglican Bishop of Rwenzori Diosese Reuben Kisembo and Bishop Jimmy Katuramu of the Pentecostal Churches. The regional Kadhi Sheikh Habib Monday, who is also an advisor to the Mufti of Uganda Sheik Shaban Mubajje, was also appointed as a member of the tribunal.

President Museveni who was on a two-day working visit of Kyenjojo and Fort Portal, yesterday told leaders who included Supreme Council, Principal Advisors of King Oyo Nyimba Kabamba Iguru Rukidi IV, religious leaders, clan representatives and Prince David Kijanangoma and his supporters, that he has no powers to intervene in cases that are in court but cautioned that this can deepen the conflicts in Tooro Kingdom. He concurred with the Bishops who proposed that the two sides meet and resolve their misunderstandings.

The President had invited the leaders to a meeting at the State Lodge in Fort Portal to try and find a lasting solution to the conflict. According to Museveni, the conflict between King Oyo and Prince Kijanangoma over alleged poor management of the Kingdoms Affairs threatens to divide the people of Tooro and to derail development.

“If the institution is used progressively it can be very useful. When you meet challenges you need to meet and resolve your conflicts. You need to discuss these conflicts confidentially,” Museveni observed.

He thanked the leaders for supporting the Kingdom particularly after the death of Omukama Kaboyo and also thanked the Queen Mother Best Kemigisa for having worked hard and cooperated with him and other stakeholders in ensuring the good growth of the King.

Further, he warned the people of Tooro not to mix kingdom matters with politics, urging them to live in harmony and to also promote culture with particular reference to language and developmental initiatives.

The president said that Kabarole District has got an HIV/AIDS prevalence rate of 12%, adding that the leaders must work hard to sensitize the masses against the killer disease.

“AIDS is not a medical problem but a social one. The Kingdom can continue to support the Government in its efforts to fight the Aids scourge. If the Church and the Kingdom cooperate in fighting the scourge we shall make a lot of progress,” he said.

Bishop Reuben Kisembo of Rwenzori Diocese who spoke on behalf of the religious leaders proposed that there should be dialogue between the two groups and called on the Central Government to protect King Oyo. They proposed that the Tooro Kingdom Constitution be revised and that supporters of Prince Kijanangoma respect king Oyo.

The Omuhikirwa (Prime Minister) of Tooro Bernard Tungwako welcomed President Museveni to the Kingdom and thanked him for the peace he ushered in the Kingdom, Uganda and the Great Lakes region.  He thanked him for nurturing the King and saluted him for the capture of the Allied Democratic Forces leader, Jamil Mukulu and said that the murder of students of Kicwamba (Technical Institute) remains in the people’s memories.

About a month ago Mukulu, a Christian-turned Muslim, was arrested in Tanzania and last Sunday he was extradited to Uganda where he is expected to face multiple murder charges in relation to the heinous activities reportedly carried out by his rebel outfit, the ADF.

Mukulu was arrested in March as he tried to secure travel documents for his children. At the time of arrest, he was using the aliases James Amos Mazenjo.

However, Interpol had listed Mukulu on its ‘Red Notice’ and the United Nations had declared him a wanted man. Consequently, his extradition was processed and on  June 26,  a Tanzanian court ruled that he to be sent back to Uganda to face the various charges levied against him but a date for his appearance in court is yet to be announced.