AMITY Child is one of the many charity organisations in Uganda today that reaches out to the youth particularly children who are vulnerable and in need of assistance. It ensures that these children are given a chance to make it in life mainly by focusing on their education.

Amity Child aims at ensuring that Uganda’s next generation is one that is educated, intellectual and innovative.

Located in Nakulabye near the Coca Cola depot, Amity Child Uganda was started by Danson Tushabe, 25, who is currently the administrator. Tushabe, like most children in Uganda today, grew up in rather dire conditions and found himself in need of help in order for him to attain an education. “ I too grew up rather needy and needed help, I got no help from the government because it was tricky to get sponsorship from the them; it involves a lot of politics.” Luckily for him an angel came in the form of the ‘Government of India’ which at that time was offering scholarships and when he applied he was fortunate enough to get one.

However, after studying IT at Makerere University, Tushabe didn’t find himself working for a prestigious company or organization like any average university graduate, instead the career path he chose was to reciprocate the empathy that was shown to him thus the birth of ‘Amity Child Uganda’, an idea the Tushabe thought about during his university days. “I actually started planning this organization even in my university days” and this he accomplished this by making partnerships with schools and institutions that offer bursary programs to students with financial difficulties.

Currently Amity with the exception of well-wishers who offer donations, is not funded by any outside sources but mostly relies on the co-operation of these various institutions among which are St. Charles Lwanga located in Kakiri-Wakiso district, Good Choice Nursery and Primary-Kireka and Kampala University in Ggaba. Amity offers a 50% scholarship to any child in need of help however they still go an extra mile for some of those few children who can’t afford it. Over the four year period that this organization has been running over 1230 individuals have either been through the system or have passed through it. Mr. Tushabe hopes that more children could learn about this organization. “We are aiming at sensitizing more of them, to inform more children about us especially those in slums.” When asked about the choice of name he said Amity means ‘friendship and goodwill’ and that the organisation aims at living up to the name.

Twenty three-year Mathias Atukunda, a beneficiary, completed his studies in Journalism at Makerere Business and Innovations Centre. “I really have nothing negative to say about them, they were so kind and helpful, words can’t even begin to describe how much I appreciate what they did for me,” Atukunda, said. He is currently in Mbarara hoping to become a successful journalist one day. 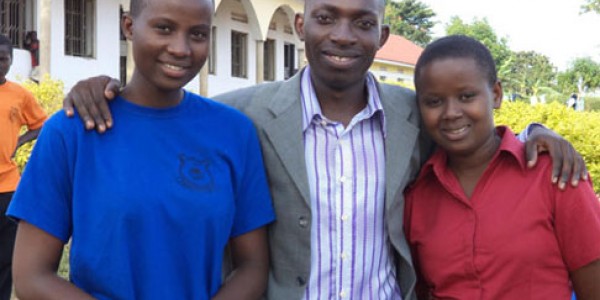 Another student currently still under the care of the same organization is Phiona Nakato.

“I was hopeless; I didn’t have enough funds to pay for my tuition and didn’t know what to do. But they helped me over at Amity when I beseeched them; I completed a certificate course at Team Business Institute,” she says.

Nakato has now decided to pursue a diploma at the same institute, with the help of Amity Child Uganda. “In fact after what they did for me I decided to take my sisters there as well; because we all suffered the same dilemma and they welcomed them with open arms, now they study at St. Juliana High School-Gayaza. They really have been so good to us,” she explains.

“We hope more individuals out there can hear about us! That way people can help fund us and contribute to our cause both locally and internationally,” says Mr. Tushabe and adds: “With the help of others more children’s lives can be impacted.”