Meet Jimmy Muhumuza Atooki a graduate from Kyambogo University who has decided to use personal skills acquired from his parents and he is applying them to earn a living.

Muhumuza, who runs a bakery at his brother’s home in Nakawa, revealed to me that he started his business back in 2012 during his form six vacation because he had realized that there was a shortage of money from his parents’ pockets to make him continue with education.

The 25 years old revealed to me that he had acquired skills of baking from his parents who used make breads days back.

During his vacation Jimmy decided to improvise a shelter and he roofed a corridor at his brother’s home where he placed his two tray oven that was used before by his parents’ and he managed to Start with an initial capital of 300.000Shillings provided to him by his brother Julius.

I decided to start up my bakery which I branded BUGOLOBI CONFECTIONERY while producing one product which was sponge roll but after a period of seven month the production increased and i even introduced other kinds of products such as wedding cakes, marble cakes, cookies and even I added crisps and this was due to an increase in the Market demand he explains. 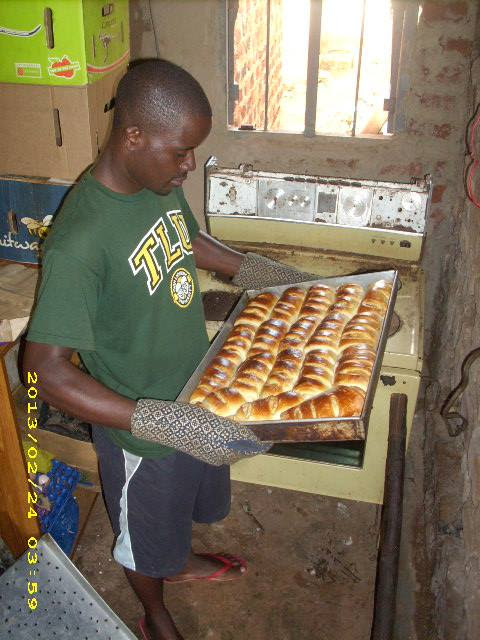 In his story Jimmy reveals that he decided to join University as well as he was running his bakery business and this made him pay tuition fees by himself .Despite qualifying to be a professional teacher he has decided to put his papers aside and continue with his business. Am not joining the job market to look for jobs of my profession am going to use my informal skill to earn a living, he explains.

Jimmy reveals that apart from funding his education, his business has helped him to create new friends, improve his personal standards of living and maintain the family up keep.

Looking at side B of his business jimmy says that he still faces some challenges such as power which is ever not constant, high transport costs during marketing, theft and delay in payment by his customers as well as limited capital to expand his business.

He hopes of maintaining his business using the skills acquired from his parents than loitering looking for jobs of his professional.

Prof. Balunywa to MSMEs: Government is legislating you out of business