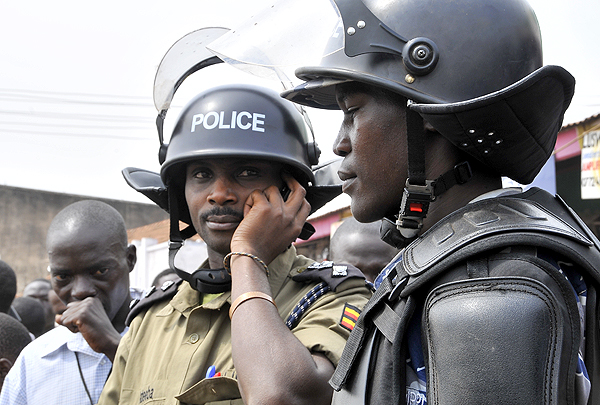 Police in the Albertine region recently blocked some area Members of Parliament from carrying out a demonstration against what they call ‘lies by the government’.

According to police spokesperson Fred Enanga, the legislators including Barnabas Tinkasimiire (Buyaga) and Robinah Nabbanja (Kibaale) claim that in 2011 President Museveni promised to give Kagadi a district status by July the same year, a pledge that did not come to pass.

So, according to police, last week the two and others at large organized to stage a demonstration before the finance minister Matia Kasaija, who was to attend a fundraising function in the Kigezi region but the police thwarted their plans.

Last year, the Minister for Local Government Adolf Mwesige tabled before Parliament a proposal for the creation of 25 more districts, saying government wants to take services closer to the people. The proposal faced resistance from the civil society, opposition and some ruling party MPs who reasoned that creating more districts without resources to fund them is economically unviable.

And, on August 13 this year Mr Mwesige withdrew a bill to create more districts citing the lack of funds, something that has since rubbed several politicians the wrong way.

In a related development, Parliament recently approved the creation of 43 new counties, raising the number of MPs to over 400.

Meanwhile, the police have this morning arrested three members of a youth activist group, the Youth for Change, which had planned to hold a demonstration in the city centre.

Those arrested included Robinson Wobulembo, the group’s National Coordinator, Arthur Mugenyi and Dickson Nagalamo, and the three are being held at the Central Police Station in Kampala.

According to Police Spokesperson Enanga, the youth planned to start their demo from the Constitutional Square, head to Parliament and finally to the Electoral Commission  with the group demanding for an ‘independent Electoral Commission’ and calling upon the army and police to desist from engaging in electoral activities.

But Mr Enanga said that the planned demonstration was unlawful under the Public Order Management Act and that the police had not been informed.

He also said the police believe that some politicians are using members of these youth groups for selfish interests as the country prepares for the 2016 general elections.

Mr Enanga also reiterated that the police was bound to carry out its constitutional duties in line with the law.

“We as the police are not against any demonstrations since the Constitution grants all Ugandans that right, but this should be done in accordance to the law.” he said.