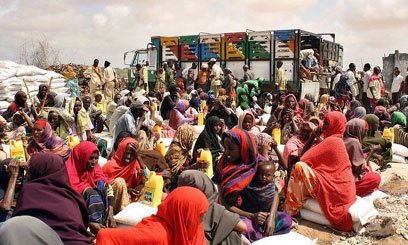 Four hundred and thirty five thousand Somali refugees are to be voluntarily repatriated from Kenya over the next five years.

According to a July-August report by the United Nations Office for the Coordination of Humanitarian Affairs (UNOCHA) in East Africa, the decision was concretised during a July 29 meeting of stakeholders, operating under the auspices of the Tripartite Commission for the Voluntary Repatriation of Somali Refugees from Kenya.

The repatriation of Somali refuges comes in the wake of persistent terror attacks carried out by suspected Al Shabaab, a Somali terrorist group that reportedly has links with other Somali nationals living in Kenya as citizens, illegal immigrants and refugees.

And, according to the three parties indicate that under the Joint Strategy and Operational Plan, this year will see 10.000 Somali refugees repatriated from Kenya and reintegrated in the Somali community and already 116 refugees were on August 5 flown from Dadaab to Mogadishu in two planes. The other repatriates will return home as follows: 100,000 in 2016; 150,000 in 2017; 130,000 in 2018 and 35,000 in 2019 and will be reintegrated in nine areas such as Mogadishu, Afgoye, Jowhar, WanlaWeyn and Belet Weyn.

Others include Luuq, Baidoa and Kismayo, the areas which were used to pioneer the pilot phase from December 2014 and June this year.