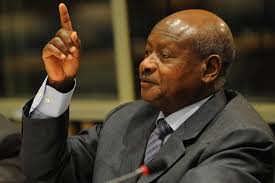 President Yoweri Museveni has directed the Regional Police Commander for Kapchorwa to release some elderly women arrested for practicing female genital mutilation and cautioned that the issue needs to be handled sensitively.

“I heard that people were arrested for cutting our girls. Release them and we start a new page. I don’t know who taught that engineering. Biology does not agree with you. If you get a plastic cloth and interfere with it, it looses its elasticity. What sort of science are you doing? You get a healthy body and tamper with it! This is wrong science,” he said.

President Museveni who was on a one-day working tour of Bukwo district to promote the Operation Wealth Creation campaign commended the people of Bukwo for being hard working but urged them to exploit cost effective enterprises that can improve their incomes.

Speaking at a rally at Amanang Secondary School grounds in Bukwo District, President Museveni advised the people to grow crops like Arabic coffee, Irish potatoes, wheat and to also engage in poultry rearing and piggery that will earn them more money than maize.

“You are very hardworking people and I can see you have grown a lot of maize. But I hear the maize takes nine months to mature and you earn between Shs 500,000 to one million per acre. The calculation of maize production does not satisfy me,” he said.

Museveni said for the first time the NRM government has ensured improved education, health, good roads and electricity and guaranteed peace in the whole country.

“I am paying my debts slowly; NRM and UPDF have finally guaranteed peace in the whole country. Electricity is already in Kween and they have already laid the poles in Bukwo. We are going to work on the road from Kapchorwa to Bukwo that will also link us with Kenya,” he said.

The President urged the people of Bukwo to vote wisely so that peace is maintained and more developments implemented.

He said the issue of UBC Television and Radio boosters will be studied.

Initially President Museveni commissioned 14 classroom blocks, one laboratory and one library at Amanang Senior Secondary School. He also unveiled a foundation stone for the construction of Bukwo District Headquarters. The President also visited the family of the former Member of Parliament for Kongasis constituency in Bukwo District, the late Toskin Bartile, and paid his respects before having a meeting with the family members.