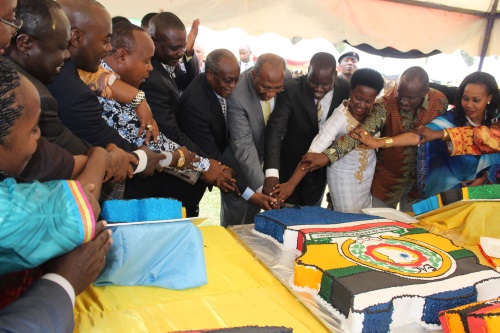 The East African Legislative Assembly has adopted a report on climate change, with calls on the five partner states to promote proactive approaches to preparedness in light of climate change.

The report is based on recommendations made during an EALA workshop held in the Burundian capital, Bujumbura in March this year.

At the same time, the workshop sought to identify the role of Parliamentarians in implementation of Gender Sensitive Climate Change Policies and Practical measures.

Meanwhile, the Report, the Regional Parliamentarians Policy on Climate Change and Gender, that calls for the inculcation of approaches such as early warning systems and modalities for flood and drought management, was presented by the Chairperson of the Agriculture, Tourism and Natural Resources Committee, Christophe Bazivamo during a plenary session held in Kampala.

During debate Abdullah Mwinyi called for demarcation of specific areas for cattle keepers so that enough fodder is realized and sustainability is realised.

Mumbi Ngaru (Kenya) said natural and man-made events both contribute to Climate Change.  “We have the Disaster Risk Reduction Bill pending before the House. It needs to brought forth immediately by the Council of Ministers”, she said.

‘We should all borrow from the successes of the city’, she said and called on the Partner States to ensure the EAC Climate Change Fund received funding.

Valerie Nyirahabineza (Rwanda) said the Assembly could champion the importance of the Climate Change Fund.  “As an Assembly, we can support the Fund in a symbolic manner”, she said.

In the past, EALA has passed several environmental Bills including Transboundary Ecosystems Management Bill (2010), the EAC Polythene Material Control Bill, 2014. The EAC Disaster Risk Reduction and Management Control Bill (2014) is under consultation, while work has also commenced on the EAC Climate Change Bill and a Climate Change Fund.