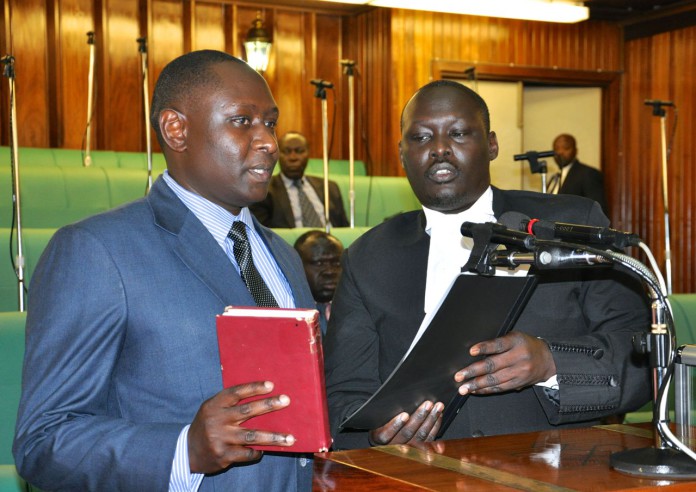 Dr Anthony Luyirika Kafumbe has been sworn-in as the new East African Legislative Assembly (EALA) Counsel.
Dr Kafumbe’s Oath of Allegiance was administered by the EALA Clerk before the Speaker Dan Fred Kidega at a session in Kampala on August 27.
Hon Dr Kafumbe, who now becomes an ex-officio EALA member, was ushered into the House by Emmanuel Nengo and Dora Byamukama, and took the oath in accordance with Rule 5 of the Rules of Procedure of the Assembly. He was appointed Counsel to the Community (CTC) by the Council of ministers 32ndsitting in Arusha in August this year, and replaces Wilbert Kaahwa, who retired last year.
Dr Kafumbe’s duties include offering legal advice to the EAC, attending and advising Council of Ministers and representing the Community at the East African Court of Justice (EACJ).
Prior to his appointment, Dr Kafumbe, who holds a doctorate from the University of Glasgow, Scotland (2006), was the Principal Legal Officer of the Community, having joined the EAC in July 2008.
He also holds Masters of Laws from the University of Pretoria, South Africa (2000); a Masters of Business Administration from ESAMI, Arusha, Tanzania (2003); has lectured at Makerere University and also worked as a Senior State Attorney, Ministry of Justice of Uganda.