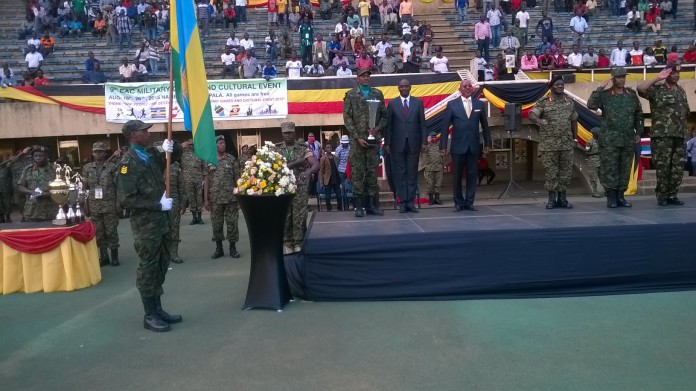 Rwanda is to host the East African Community Military games and Cultural Event next year.

The development follows recommendations made by the partner states Chiefs of Defence Forces (CDFs), who met in Kampala during the just-concluded Ninth Edition of EAC military games staged at Namboole National Stadium, on the outskirts of Kampala city.
The closing ceremony of the 11-day gala was presided over by Uganda’s Minister of State for Defence General Jeje Odong, who noted that the military games were a product of the 1998 Memorandum of Understanding (MoU) on Defence Matters, signed by Uganda, Kenya and Tanzania, the three original but seemingly distrustful members of the then EAC. The MoU was revised in 2001.
“There is no doubt that today the military in our region have made remarkable and exemplary progress in the integration of their operations and if all other sectors could borrow a leaf from the defence sector, we would realize the EAC dreams that we all cherish sooner than later,” Gen Odong said.
EAC Secretary General Amb Dr Richard Sezibera said he was inspired by the participants’ commitment towards the greater EAC integration.
“Their aspirations are for an East Africa that, first and foremost, continues to be peaceful, secure and stable and whose overriding agenda is to raise productivity and savings; and attract foreign investments in order to create wealth and improve the living standards of the people”.
The Secretary General commended the Armed Forces for promoting the use of Kiswahili, the lingua franca for the East Africa Community and also for adopting a Regional Counter Terrorism Strategy as adopted by the EAC Council of Ministers, and sharing of Intelligence among themselves.
He noted that so far all the Partner States, except one, had ratified the Protocol on Cooperation on Defence and urged that Partner State to expedite the ratification process.
He also commended the sector for  agreeing to use Defence Technical Facilities offered for joint utilization by the Partner States namely; Muzinda Engineering Unit in the Republic of Burundi; Defence Technical College (DEFTEC) and the Defence Mobile Field Kitchen (DMFK) in the Republic of Kenya; the Kinyinya Asphalt and Concrete Plant in the Republic of Rwanda; Tanzania Automobile Technical Centre (TATC) Workshop facilities in the United Republic of Tanzania; and Uganda Mechanical Engineering College (UMEC) in the Republic of Uganda.
Uganda’s Chief of Defence Forces, General Katumba Wamala, who spoke on behalf of the other CDFs, said the EAC Military Games and Cultural Event was a unifying factor in the regional integration and development process.
General Wamala hailed the EAC Council of Ministers, the Sectoral Committee on Cooperation in Defence and the EAC Secretariat for the support they have continued to give to the defence sector including permission to host the games and cultural event.
He commended the performance of the contingents and wondered why the Military was not producing country and international champions in the various disciplines.
The East African Community Military Games and Cultural Event is an annual rotating event that started in 2005 when the first edition was held in Kampala, Uganda. Other editions of the games have been held in Nairobi, Kenya (2006), in Zanzibar, Tanzania (2007) and in Kampala (June 2008).