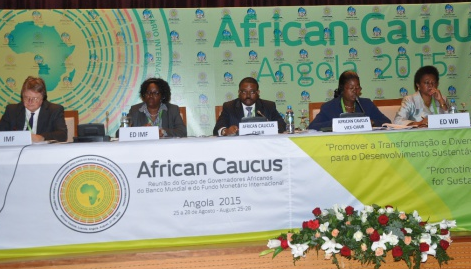 African ministers and Central Bank governors meeting in the Angolan capital Luanda have expressed concern at the illicit financial flows from the continent.

Speaking at the African Caucus forum, the President of the African Group and Minister of Finance of Angola, Armando Manuel noted that savings can be made by reducing on the financial outflows.

“This obliges us to look for other sources of financing including savings that can be made from restricting illicit financial flows from Africa, especially measures that can be taken to radically reduce these mass monetary outflows and guarantee that they are used for development in the African continent,” he noted.

Nineteen African ministers of finance and fourteen Central Bank Governors are meeting in preparation for the annual meetings of the International Monetary Fund (IMF) and the World Bank Group, and emphasis today fell on combatting illicit financial flows to improve the mobilisation of internal resources, a topic addressed by former South African president Thabo Mbeki.

‘The African Caucus was created with the aim of preventing African Governors from presenting in the Annual Meeting of the IMF and WBG the economic and financial problems that affect the respective countries alone,’ a release by Africa Press Organisation (APO), states.

And, speaking at the forum, Vicente underscored the importance of poverty alleviation, saying it leads to sustainable development.

Vicente further noted that African countries must have a more comprehensive outlook, integrating the diversification of the economy based on national and regional value chains in potential competitive sectors.

“In truth, we have to add more value to our resources, whether in the directly productive activities, or through infrastructure and additional or supporting activities such as, transport and telecommunications systems, banking and financial systems generating integrated development hubs, “he said.

Discussion panels for the opening day included regional economic outlooks, economic transformation and diversification, combating illicit financial flows to improve mobilisation of internal resources, environmental and social safeguards and consultations for the governors.
Meanwhile, David Robinson, the Vice-Director of the International Monetary Fund (IMF), and one of the speakers at the African Caucus said that the fall in oil prices is a significant negative shock for the oil exporting countries which have had to make marked adjustments.

The representative of the IMF to the African Caucus noted that the oil producing countries have to tackle issues such as the orderly implementation of spending cuts, prioritise social sectors and infrastructure and mobilise non-oil revenues.