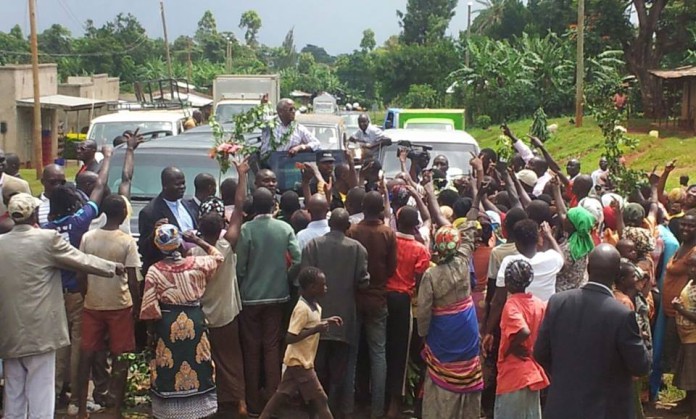 After attracting a huge gathering in Mbale on his first day of consultations, former Prime Minister John Patrick Amama Mbabazi is today in Kapchorwa for further consultations regarding his candidature in the 2016 elections.

Mbabazi, who is to address a rally at the Booma grounds, announced his candidature on June 16, after falling out with his erstwhile all and confidante President Yoweri Museveni. At the time Mbabazi released message on ‘yuotube’ indicating he would contest for both National Resistance Movement (NRM) chairmanship and the party flag bearer post for the forthcoming elections.

However, the tide in the party did not favour Mbabazi’s ship, prompting him to change course and declare he would run as an Independent candidate. Since then he also released an 8-point programme, detailing too voters what he intends to do if elected President.

Tomorrow Mbabazi goes to the former industrial town of Jinja, where he will address a rally at Kakindu stadium.

In July Mbabazi was blocked by police from going to Mbale for consultations, with the cops intimating that he had not been cleared by the NRM to contest for the party’s flag bearer position.

However, this time round the police has allowed Mbabazi to consult.

Meanwhile, it is not clear if Mbabazi will join The Democratic Alliance (TDA), a loose alliance of political parties and individuals who want to see an end to Mr Museveni’s three-decade rule. So far former vice president Professor Gilbert Bukenya has already picked forms for the joint candidature, while Democratic Party’s Norbert Mao has also indicated he will run under the banner of TDA.

Another opposition figure whose intentions are not yet clear is Forum for Democratic Change flag bearer Col (rtd) Dr Kizza Besigye, who has threatened to boycott the 2016 elections if electoral reforms are not carried.

Besigye recently defeated FDC president Major General (rtd) to clinch the party’s flag bearer position and in a speech before his election, declared he would follow the recommendations dubbed the Citizens’ Compact, a set of demands made after nation-wide consultations by the opposition and some civil society organisations.

In a related development, over 40 people have picked the presidential nomination forms but analysts say many of these might fail to get the requisite 100 signatures from two-thirds of the districts in Uganda, as enshrined in the Elections Act.