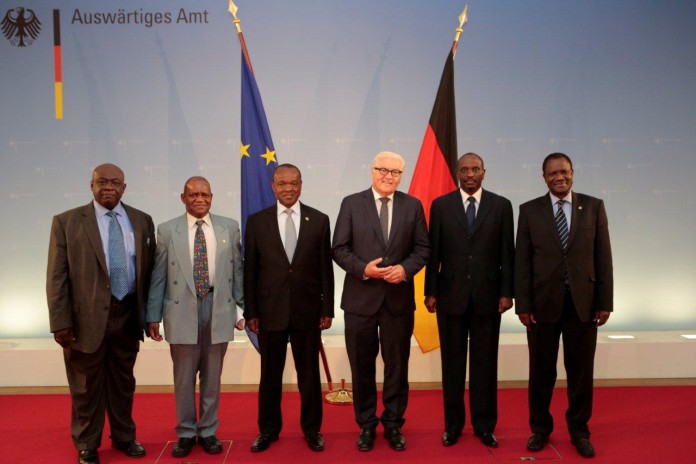 About five hundred German investors are eying business prospects in Africa, with 50 high net worth investors eyeing the East Africa region.
The intentions were made at the just-concluded 1st German Africa Business Summit on September 7-8 in Berlin, attended by among others the EAC Secretary General Ambassador Richard Sezibera, who highlighted the many attractive investment features in the EAC.
Speaking an exceptional East Africa Community investor’s forum held at the closing of the summit Dr Sezibera emphasized that a growing population of about 150m people and the highest level of economic integration achieved in Africa by the EAC were two key areas any serious investor would consider when scouting for the most attractive business prospects.
Meanwhile, delivering a key note address Dr. Frank-Walter Steinmeier Federal Minister for Foreign Affairs emphasized the need to move towards economic cooperation with Africa, away from the traditional development cooperation.
‘Economic cooperation will create jobs, reduce illegal migration, poverty levels and increase the market share of German businesses operating in Sub Saharan Africa,’ Dr Steimeier was quoted as saying.
While hosting the heads of delegations from the African Regional Economic Communities that included Amb Sezibera, the Deputy Chairperson of African Union Erastus Mwencha, the President of ECOWAS Kadre Quedraogo and the Deputy Executive Secretary of Southern African Development Community Dr. Mbinkosi Mhlongo, Dr Steinmeier also highlighted the importance of including Digital Agenda in the current development cooperation frameworks.
The AREC heads of delegations also discussed how to combat illegal immigration, terrorism and how to improve governance with Dr Steinmeier.
Dr Steinmeier also commended the reforms achieved by the EAC that included the Customs Union, Common Market and the path towards the Monetary Union.
And, participating at the ‘Panel of Honour’ Dr Sezibera urged Europe to contribute to Africa’s growth through strong economic partnerships and also expressed appreciation for the financial and technical assistance accorded to the EAC through the yearly contribution to the partnership fund, construction of the EAC headquarters in Arusha and visit by the President of the Federal Republic of Germany Joachim Gauck to EAC headquarters earlier this year.
Courtesy call to the former President of Germany
Meanwhile, the EAC Secretary General also paid a courtesy call on the former President of the Federal Republic of Germany, Dr. Horst Kohler, and hailed him for his support in helping German companies set up businesses in the EAC region.
Dr Sezibera also extended an invitation to Dr. Kohler to deliver a keynote address during the upcoming Academia Public Private Partnership Forum organized by the Inter-University Council of East Africa that will be held from October 22nd – 23rd in Kampala, an invitation which the former President accepted.
On his part, Dr Koher hailed the reforms done by EAC to improve the business climate and to make it easier for German business community to enter the market.
He also noted that EAC region has to improve its vocational training for the young people, as the region gears up to became the manufacturing hub for Africa.
Dr Kohler emphasized that the German – Africa Business Summit was a noble initiative, which he expects to bridge the information gap existing between German entrepreneurs and potential African business partners.
New Strategic Partnership between EAC-EABC and German Africa Business Association
EAC Secretary General held a consultative meeting with the Chairman of German Africa Business Association Dr. Stefan Liebing and Manager for Eastern Africa Asmau Nitardy. During the discussion Amb Sezibera noted that EAC region has a positive perception of German made products and the German business community should take advantage and set up operations in the region.
He added that the region offers some of the best incentives through preferential trade agreements for exports to European markets and US market.
Dr Liebing expressed an interest in setting up a business information exchange portal between German and East Africa Businesses. The portal will exchange information on tenders available in the region and any new infrastructure projects.
He disclosed that German small and medium enterprises that employ between 1,500 – 5,000 staff members lacked information about business opportunities available in East Africa.
Dr Liebing also informed the EAC delegation of their strategic plan to start offering bundled solutions to private and public sector organizations in East Africa. This will allow them to compete with their counter parts from Asia.
EAC and the German Africa Business Association delegation agreed to set up a steering team that will conclude on a memorandum of understanding for creating a solid partnership in three core areas i.e. renewable energy, agro chemicals and fertilizer, and pharmaceuticals.
East Africa Community investor’s forum
The Regional Director for Sub Saharan Africa for the Federal Republic of German Government Mr. Georg Schmidt hosted an investors’ forum for the EAC and noted that the organisation is a shining example of a successful regional economic community in Africa and his conception of the expanded region would either include Somalia, Ethiopia, Southern Sudan or Madagascar.
According to the investors EAC needs to sort out four key challenges to become the most attractive regional economic community in Africa among German investors; streamline border operations, regular engagement with German investors, improve ranking on the ease of doing-business report and fast track full implementation of the Common  Market Protocol.