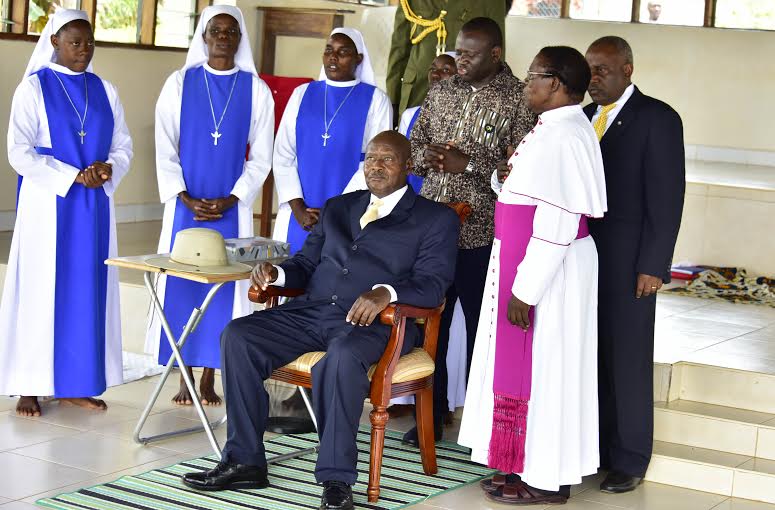 President Yoweri Museveni has commended the youth and the Catholic congregation at Mount Zion Prayer Centre, Bukalango, in Nadangira Parish Wakiso District for being prayerful, hardworking and having the fear of God.

“I thank all of you for sparing time to worship God. I am happy to note that the evangelists have enabled the children and youth to love religion. It is good for the young people to fear and respect God,” he said, adding that the fear of the Lord is the beginning of wisdom.

The President was speaking during a visit he made to the Mount Zion Prayer Centre in Wakiso. The congregation congratulated him upon his 71st birthday. The prayers were led by the Director of the Centre Monsignor Expedito Magembe. Museveni says he was born on September 15, 1944.

President Museveni said that his duty was to fight for peace in the whole of Uganda and revealed that Bukalango was one of the battle grounds during the people’s protracted liberation war. Quoting from the Holy Bible, Mathew: Chapter 7 Verse 7, “Ask and it will be given, seek and you will find”, he was pleased to note that what was a battle field was now a place of worship. He thanked the religious leaders for teaching the people to work hard. He thanked the congregation for praying for him, his family and for Uganda.

The Director of Mount Zion Prayer Centre Monsignor Expedito Magembe thanked God for enabling President Museveni to lead Uganda peacefully. He prayed to God to continue blessing the President whom he described as a person who has fought for peace and prayed for continued peace in the homes and in Uganda.

Monsignor Magembe prayed to God to protect President Museveni and for peaceful elections in 2016.

The Chairman of the executive Committee in Charge of construction Emmanuel Katongole congratulated President Museveni upon his 71st birthday. He thanked him for his contribution of Shs100 million towards the construction of the Centre during his last visit. He saluted the President for inviting Pope Francis to visit Uganda.