A Prisons officer chose to take his work frustration to his superior’s Facebook wall, drawing mixed criticism from his boss’ followers and a way forward response from the boss himself.

Writing on the Prisons Commissioner General Johnson Byabasaija’s wall, Walter Okot noted, “Sir my OC decided not to deploy me and when I went to him to ask why I am not deployed he had my door broken and all my things were taken to the store,” he writes.

Okot says that having been evicted from the prisons house, he had no accommodation and decided to pick his bag and go back home where he is currently living. 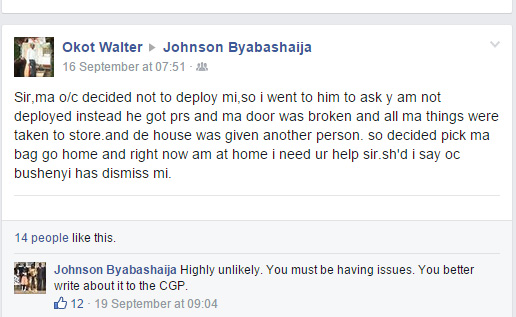 In a post written on 16 September, largely in shorthand, Walter further asked the Police chief whether the actions of the officer in charge tantamount to him being dismissed from the prisons force.

“I decided pick ma bag go home and right now am at home I need ur (sic) help sir. sh’d I say OC Bushenyi has dismiss (sic) me?” he asked.

Three days later, the Prisons boss was the first to respond saying Walter was obviously having issues and advised him to write to him through the right channels.

“Highly unlikely, you must be having issues. You better write about it to the CGP,” he said.

The commissioner’s drew comments from a wide range of his followers some in support of Okello and others blaming him for lack of decorum.

Ephraim Kasozi, a journalist with Daily Monitor chipped in in support of Walter saying he could have wanted his boss to get the information so quickly.

“I don’t see anything wrong with the media, unless you are trying to hide something. Actually your statement amounts to threatening violence,” he said in response to an earlier comment by RachealIchodu who warned the likes of Walter to “NEVER AND NEVER discuss such issues in the media.”

However, MrByabashaija supported Ichodu’s warning saying, “We have Superintendents of Prisons to handle such, it doesn’t help to go to the social media as he did but still we will have to follow the service doctrine.” In a detailed exchange with the Commissioner’s followers, Okot revealed that he is suffering because of a disagreement with his superior in Bushenyi over a girlfriend and that many officers have deserted the service because of mistreatment.

“This year only 6 people deserted.an many are still following me how can u break some bodies house because of girlfriend? It was too much I had nowhere sleep,” he said.