Forum for Democratic Change flag bearer and top contender for TDA joint candidature has this afternoon left the alliance’s meeting taking place at its offices in Naguru. 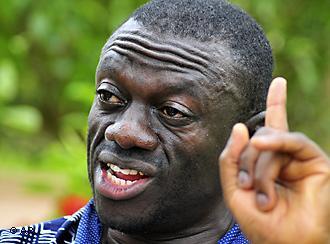 Clad in a white shirt and black trousers, Besigye, stormed out of the meeting and briefly talked to reporters camped outside the alliance’s offices before being driven away in his white landcruizer.

TDA  is expected to communicate its long awaited pronouncement on who becomes the opposition joint candidate to face off with President Museveni this evening.

Hon. Wafula Oguttu the official Spokesperson for the TDA says Besigye moved of the meeting because he had finished making his contribution and therefore was free to leave. “He has just finished talking to us and he is heading for another meeting,” he said.

Besigye on his part while talking to reporters said he is anticipating that the summit will decide in favor of him since he has convinced them to the best of his ability that he has the best credentials to out Museveni.

“Every white smoke will be in my favour because we are looking for TDA candidate not my candidate,” said the visibly confident Besigye.

However his main contender, John Patrick AmamaMbabazi is still inside the meeting while Former Vice President BalibasekaBukenya is said to be absent without apology.