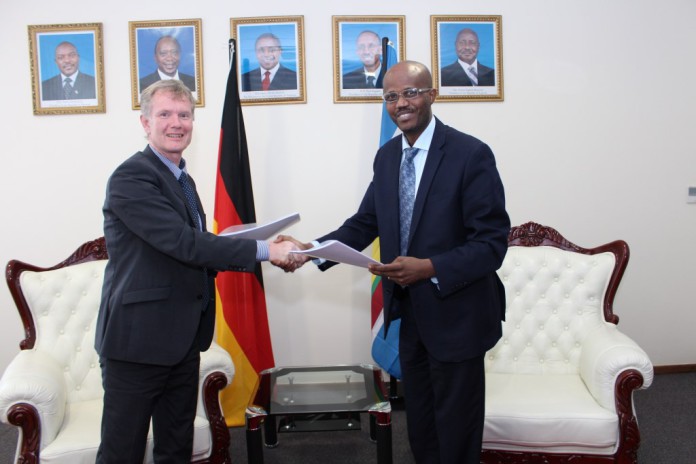 The Federal Republic of Germany has committed 37 million Euros to the East African integration process.
According to a release by the EAC Secretariat, 10 million Euros with be used to prevent and control the spread of epidemics and communicable disease; 10 million Euros will be used for water resource management on Lake Victoria, while 17 million Euros will go towards strengthening the EAC Secretariat and economic integration between 2016 and 2018.
‘The programme is focussing on institutional strengthening of the EAC Secretariat and on supporting the implementation of the Customs Union, Common Market Protocols and Monetary Union. This includes the elimination of Non-Tariff Barriers such as tax harmonisation as well as Mutual Recognition Agreements for qualifications. At the same time Germany will support the EAC in promoting private investment especially in the pharmaceutical sector, including the establishment of a regional quality infrastructure for the pharmaceutical sector, the release states in part.

‘’We have truly benefited from the German support which has catalyzed other development Partners to support our projects and programmes. In addition, Germany has given the EAC a permanent home by financing  the construction of the new Headquarters that today houses the Secretariat, the Court and the Assembly under one roof thus greatly easing the EAC Organs interactions and communication’’, the  EAC Deputy Secretary General in charge of Finance and Administration, Mr Liberat Mfumukeko said during the talks at the EAC headquarters in Arusha.

He highlighted the successes achieved through German support in the realisation of the fully fledged Customs Union, the Common Market, and the commitments to support the realisation of the Monetary Union in the succeeding programme.
Mr Georg Rademacher, Head of the German delegation, said: “Our support underlines the importance we give to the East African Community. The EAC is a role model and pace-setter in Africa and we are proud working closely with you in order to contribute to the well-being and prosperity of the citizens of this region”.
He underlined that Germany is also supporting substantial regional infrastructure projects with promotional loans of the German Development Bank, KfW.

Last week Ambassador Kochanke and Secretary General Ambassador Richard Sezibera signed a financial agreement to commit 30 million euros for live-saving vaccines in the EAC and the establishment of the EAC Regional Centre of Excellence for Health Supply Chain Management in Kigali.

With a view to strengthen the pandemic preparedness in the EAC, Germany had announced its willingness to provide an additional 3 million euros in technical assistance for the region`s crisis response capacity (out of special funds for 2016).
Since cooperation began in 1998 the total volume of German support to the EAC amounts to almost 213 million euro. Germany also has substantial bilateral cooperation with all five EAC member states.