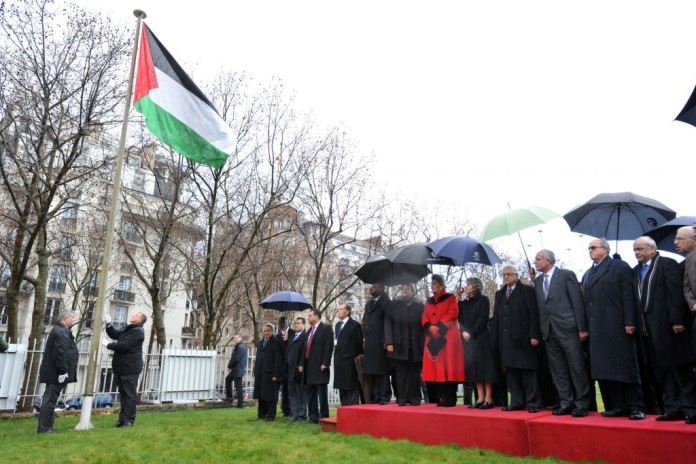 Palestinian flag at the UN would be a “proud day”
The Palestinian flag has been raised for the first time at United Nations headquarters in New York, at a ceremony attended by the President of the Palestinian Authority Mahmoud Abbas.
Addressing the UN General Assembly, Mr Abbas said it was unconscionable that the question of Palestinian statehood remained unresolved.

He also warned that the PA no longer felt bound by agreements with Israel he claimed were “continually violated”.
“As long as Israel refuses to cease settlement activities and to release of the fourth group of Palestinian prisoners in accordance with our agreements, they leave us no choice but to insist that we will not remain the only ones committed to the implementation of these agreements,” Mr Abbas said.
“We therefore declare that we cannot continue to be bound by these agreements and that Israel must assume all of its responsibilities as an occupying power.”

Israeli Prime Minister Benjamin Netanyahu’s office said Mr Abbas’s speech was “deceitful and encourages incitement and lawlessness in the Middle East”.
“We expect and call on the Authority and its leader to act responsibly and accede to the proposal of… Israel and enter into direct negotiations with Israel without preconditions.”
Mr Abbas has in the past threatened to dissolve the PA and hand sole responsibility for the West Bank to Israel if there is no chance of a peace deal.
The PA was set up as an interim administration for the major Palestinian cities in the West Bank and the Gaza Strip after the 1993 Oslo Accord. It was envisaged that a comprehensive treaty would be concluded within five years.
However, more than two decades of talks with Israel have failed to achieve a final peace settlement and an independent Palestinian state. The last round of negotiations collapsed in April 2014.

On Tuesday, Mr Abbas had said the raising of the Palestinian flag at the UN would be “a most emotional and proud day”.
raising of the flag was a “blatant attempt to hijack the UN”
The UN General Assembly passed a motion earlier this month to raise the Palestinian and Vatican flags. Israel voted against the motion, along with the United States and six other countries. Forty-five countries also abstained.
Israel’s permanent representative to the UN, Ron Prosor, said at the time that the move was a “blatant attempt to hijack the UN”. He insisted that the only way Palestinians could achieve statehood was through direct negotiations.
In 2012, the UN General Assembly voted to upgrade the status of the Palestinians to that of a “non-member observer state” – the same position that the Vatican holds.
It followed a failed bid by the Palestinians to join the international body as a full member state in 2011 because of a lack of support in the UN Security Council.
The BBC’s Kevin Connolly in Jerusalem says Palestinians faced with falling living standards and life under Israeli occupation on the West Bank are growing impatient for some sign of progress in their quest for a Palestinian state.
Raising the flag at the UN may not be as effective as raising that issue further up the world’s diplomatic agenda but it is a tangible achievement and it was within Mr Abbas’s power to deliver immediately, our correspondent adds.