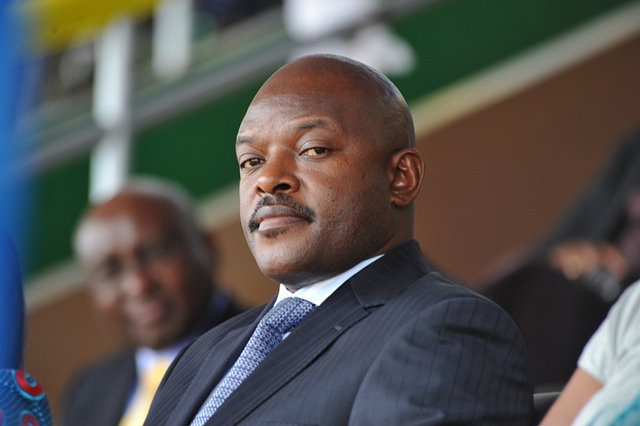 The Council of the European Union has imposed travel restrictions on four Burundi officials implicated in human rights abuses following the protests and violence that erupted after President Pierre Nkurunziza announced he was running for the ‘third term’.
“Member States shall take the measures necessary to prevent the entry into, or transit through, their territories of natural persons undermining democracy or obstructing the search for a political solution in Burundi, including by acts of violence repression, or inciting violence,” the statement issued in Luxembourg on October 1 by E Schneider on behalf of the Council President, reads in part.
In the statement titled: ‘Council Decision (CFSP) 2015/1763 of 1 October 2015 concerning restrictive measures in view of the situation in Burundi’, the Deputy Director General of the National Police Godefroid Bizimana, the Head of Cabinet of the Presidential Administration (Presidence/Police) Gervais Ndirakobuca alias Ndakugarika;  Mathias Joseph Niyonzima of the National Intelligence Service and, Leonard Ngendakumana, a former army General have been prohibited from travelling to any European Union country for one year.
‘On 22 June 2015, the Council expressed its deep concern at both the number of victims and the number of cases of serious human rights violations reported since the beginning of the crisis, particularly those abuses attributed to the security forces and to members of the Imbonerakure. The Council also reiterated that it was determined to adopt, if necessary, targeted restrictive measures against those whose actions might have led or might lead to acts of violence and repression and serious human rights violations, and/or might hamper the search for a political solution within the framework proposed by the African Union and the East African Community,.
Bizimana,47,  Ndirakobuca, 45, and Niyonzima are being accused of undermining democracy by among others fomenting violence, training and arming the Imbonakure militia, carrying out acts of repression and violence during the period when President Pierre Nkurunziza announced his ‘third term’ candidacy on April 26 2015, the ensuing protests and coup attempt on May 13, and the President’s post-election era, while Ngendakumana, 47, one of the putschists is accused of ‘publicly supporting violence as a means of achieving political goals’.
“…Responsible for obstructing the search for a political solution in Burundi by participating in the attempted coup d’état of 13 May 2015 to overthrow the Burundi Government. Responsible for acts of violence — grenade attacks — committed in Burundi, as well as for incitement to violence,” the statement says of General Ngendakumana.
Since April Burundi has been embroiled in persistent chaos following President Nkurunziza’s announcement that he would stand for election for a third term, an issue that has bred violence, leading to the killing of tens of thousands, while hundreds of thousands others have fled the tiny central African country.