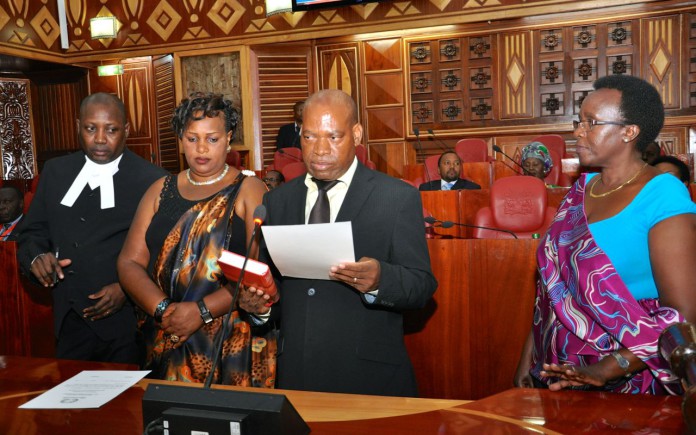 Two members of the East African Legislative Assembly have been sworn in during the 4th session sitting in the Kenyan capital, Nairobi.
Reappointed Burundi Minister for East African Affairs Leontine Nzeyimana was sworn in as an ex-officio member while Dr Francois Xavier Kalinda is a new member representing Rwanda.
The Oath of Allegiance to the House was administered by the Clerk of EALA, Kenneth Madete before the EALA Speaker, Rt Hon Daniel Kidega in accordance with Rule 5 (4) of the Rules of Procedure of the Assembly.
“No Member can sit or participate in the proceedings of the House until the Oath or Affirmation of Allegiance to the Treaty is taken,” the Rules of Procedure state in part and allow for new members to be introduced to the Assembly by two serving EALA MPs.
Nzeyimana, who was recently re-appointed Minister for EAC by President Pierre Nkurunziza following the elections in Burundi, was ushered into the House by Emerence Bucumi and Isabelle Ndahayo.  She previously served in the same position.
Dr Francois Xavier Kalinda, 53, who was elected by the Parliament of Rwanda on September 15, 2015, to replace Celestine Kabahizi who tendered in his resignation from the Assembly in June 2015, was escorted by Valerie Nyirahabineza and Dr. Odette Nyiramilimo.
Prior to his election, Dr Kalinda was the Dean of the Faculty of Law at the University of Rwanda.
A graduate of the then National University of Rwanda in 1996, Dr Kalinda pursued a Master of Law in Intellectual Property Rights at the University of Ottawa, in Canada, completing in 1999.
He also holds a Doctorate of Philosophy degree in Business Law obtained from the University of Strasbourg, France, in 2010.