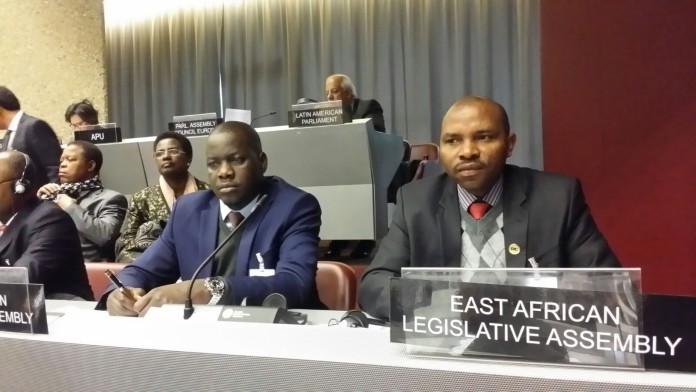 The 133rd Inter-Parliamentary Union General Assembly has commenced in Geneva, Switzerland with sustained calls for fairer and more humane migration.
The IPU General Assembly brings together over 50 Speakers and 600 Members of Parliament from 130 Parliaments globally and over the next 5 days the delegates will discuss key thematic areas on migration under the ‘the moral and economic imperative for fairer, smarter and more human migration’.
Addressing the Assembly, EALA Speaker Daniel Fred Kidega said that migration was a predominant and persistent characteristic of humanity, and that it occupied a central place in human history and current affairs.
The Speaker pushed for the uptake of the Political Federation in the East African region saying such move would demystify the refugees’ problem.  “At worst, under the Political Federation, we can only be talking about internally displaced persons and not refugees,” he remarked.
He urged the delegates to push for more humane and smarter migration.
‘As Parliamentarians, we need to focus on the migration challenge by probing the root causes of international migration, particularly global processes that are unprecedented in their power to encourage the crossing of borders’, he said.
He also decried instability in EAC neighbouring countries like Somalia, South Sudan, the Democratic Republic of Congo (DRC) and Burundi, saying it had led to the escalation of the refugee problem in the region.
Speaker Kidega is leading a delegation of EALA consisting of Straton Ndikuryayo and two EALA staff, and the top leadership of the Parliaments of Uganda, Rwanda, Kenya and Burundi are in attendance while Parliament of Tanzania is represented by senior staff.
The issue of humane migration is taking central stand following the recent Syrian crisis among others.  According to the IPU, although the more than 230 million migrants, refugees and asylum seekers in the world today represent a small percentage of the global population, rising xenophobia combined with the ongoing impact of the global economic crisis continue to warp any reasoned debate and policy response on the migration phenomenon.
In his speech IPU President Hon Saber Chowdhury said it was necessary for IPU to consider better migration in order to impact on people’s lives. He noted that IPU and the UN were working closely together and that more collaboration was expected in the coming year.
The Director of ILO said that migration was a major trend given that 1 in every 7 persons globally are migrating.   He cited degradation of environment, instabilities, demand for labour and instabilities as some of the reasons for migration.  He maintained that Parliaments can also pass legislation on diaspora and ensure policies on the same are effected.
The 133rd Assembly has also considered and approved the re-admission of Fiji into the Inter-Parliamentary Union (IPU) in a move welcomed by the organization as a significant step forward in ongoing efforts to cement democracy in the country and in IPU’s engagement with parliaments from Pacific Ocean Island nations.
The readmission at Fiji today increases the Organization’s membership to 167 national parliaments. Fiji had first joined IPU in 1997. However, a military coup in 2006, the fourth since 1970, had led to the dissolution of parliament and Fiji’s formal expulsion from the Organization in 2007.
The 133rd Assembly will also convene several IPU bodies including the Meeting of Women Parliamentarians, IPU’s Forum of Young Parliamentarians, the Committee on Middle East Questions as well as the Committee on the Human Rights of Parliamentarians. Cases involving the violations of the human rights of nearly 120 MPs from 21 countries will be examined by the IPU Committee, which will also hold up to 12 hearings with parliamentary authorities, victims and others who could assist in investigations.