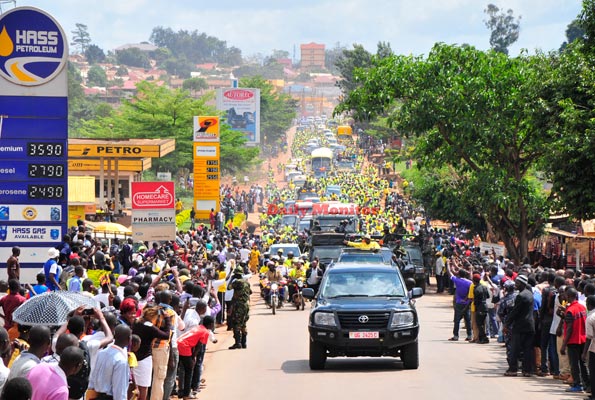 The Electoral Commission has today nominated three candidates for the  2016 presidential elections. First to be nominated was incumbent President Yoweri Museveni, who arrived at the nomination venue at Mandela National Stadium at Nambole at 10.00am in the company of his wife Janet Kataha Museveni.

Addressing reporters shortly after his nomination the president thanked Ugandans for their previous support and called upon them give him the next five-year mandate in order to consolidate the NRM achievements.

Mbabazi was proposed by Hon Anywar and seconded by Ms Nsubuga. In his address Mbabazi urged Ugandans to vote him to power in order to bring about change. Asked why he did not bring about change for the time he was in government, Mbabazi said it was because he was never President. “That is the reason I am seeking to become President so I have the executive powers to delegate my team and work for the betterment of this country,” he said.

The former Prime Minister also pledged his total commitment towards reforms, adding that he was still committed to unity in the
opposition. He also said doors were still open for talks with the Forum for Democratic Change (FDC) in order to field a single
candidate. Shortly after Mbabazi’s address former Makerere University Vice Chancellor Prof Venasius Baryamureba, in the company of his two daughters, was nominated to run in the 2016 elections. The don told reporters that his opponents that had been nominated
before him are too old to lead Uganda. “At 46 I am the right person to be entrusted with the power to govern Uganda since all my opponents are above 60 and should be in retirement. If it was in the Anglican church both Museveni and Mbabazi would be retired bishops,” he noted.

Baryamureba pleged to improve the education sector in order to solve the problem of illiteracy and unemployment, and also promised to improve agriculture, industry and the transport network. He also urged Ugandans not vote FDC flag bearer Dr Kizza Besigye, and
Mr Mbabazi, saying they have nothing new to offer Ugandans.  “Mbabazi and Museveni have governed Uganda for the last 30 thirty
years and what Mbabazi failed to do while Prime Minister, he cannot do it now,” he said.

Meanwhile, the nomination papers of aspirant Charles Lwanga of the Ecological Party of Uganda were rejected. Lwanga, who arrived at the nomination venue amid heavy downpour at around 1.30 pm, was told he could not be nominated after he failed to prove that he had paid the nomination fees of Shs20 million.

He was advised to rectify the mistakes mentioned and book another time for nomination “since nominations are open till November 4.” And, addressing the media Lwanga said he was going to correct the anomalies in order to get nominated on Wednesday.

Meanwhile, ‘Independent’ candidate Nasser Ntege Ssebagala who was supposed to appear before the Commission for nomination later today never turned up. But earlier while talking to the media Ssebagala, a former Kampala City Mayor and Advisor to President Museveni, said he would support his former boss Museveni in the 2016 elections.

Sebagala joins former Vice President Prof Gilbert Bukenya, whonannounced two weeks ago that he would support Museveni for presidency in the coming elections, and true to his word, accompanied his former boss for nomination today.