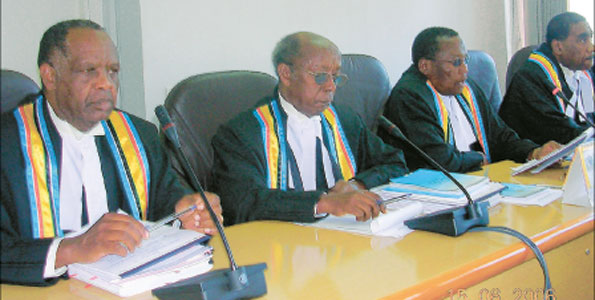 The East African Court of Justice (EACJ) has heard a matter against the EAC Secretary General, for the alleged failure to implement a Council of Ministers’ directive to two Partner States – Tanzania and Rwanda – to resolve the issue of the Rwandan citizens who were expelled from Tanzania’s Kagera region in 2013.
The matter came before a bench of the Judges of the First Instance Division composed of Honourable  Lady Justice Monica Mugenyi (Principal Judge), Justice Isaac Lenaola (Deputy Principal Judge), Justice Dr. Faustin Ntezilyayo, Justice Fakihi A Jundu and Justice Audace Ngiye in open Court.
The case was filed by the East African Law Society (EALS) represented by Prof. Fredrick Sempebwa, who submitted that the SG’s failure to comply with the Council’s decision was a breach in breach of the Treaty for the Establishment of the East African Community.
According to Prof Ssempebwa, the SG failed to implement the Council’s decision particularly in line with Article 71, which provides the functions of the Secretariat.
He also contended that the citizens who were expelled from Tanzania are citizens of a Member State of the EAC and are entitled to the right of residence and the right of establishment as well as other rights within the Treaty and the Common Market Protocol of the Community. ‘It is the duty of the Secretary General to carry out investigations and find out the truth of breach of the Treaty’ Prof Ssempebwa was quoted as saying. He also sought remedies if the Court rules in favor of the EALS.
However, Counsel for the EAC Dr Anthony Kafumbe, submitted that the matter is time barred because it occurred in August 2013 up to the time the case was filed to Court on September 8, 2015 which was beyond the two months time limit to file the case.
He also averred the case should have been filed within the provisions of Article 30 (2) of the Treaty, and also argued that the decision being contested is one directed to Tanzania and Rwanda but not the SG.
‘Under Article 16 of the Treaty, Partner States have an obligation to implement directives of the Council, that so it does not require the Secretary General once the directive is issued’, Dr Kafumbe was quoted telling court.
Dr Kafumbe said that the Secretary General had convened meetings in September 2013 and January 2015 for the two Partner States but he is not updated on the progress between the two countries. He also emphasized that the matter is still before the Council of Ministers expecting to be deliberated on in the Council of Ministers meeting expected to sit late November 2015.
The Court will deliver its judgment on notice.