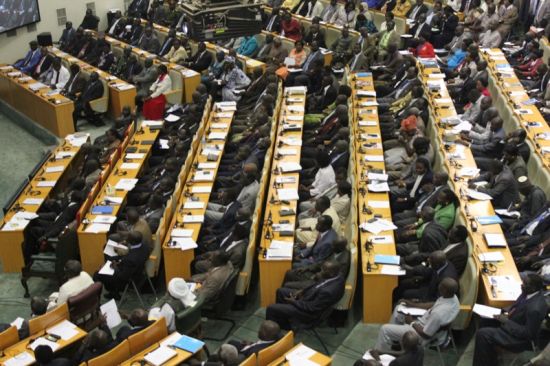 South Sudan’s parliament amended the constitution to allow more regional states and give President Salva Kiir the power to appoint provincial leaders during a transitional period that seeks to end two years of civil war.
The Justice Ministry presented the bill on October 20, after Kiir’s decree earlier that month to increase the number of states to 28, from the current 10. Lawmakers in the assembly approved it on Thursday, Parliamentary speaker Manasseh Magok Rundial said in the capital, Juba.
Minority leader Adigo Onyoti Nyikwac, one of six lawmakers who walked out during the vote, said the amendment itself violated the constitution, which needs consent from two-thirds of parliament. Only 183 of a total 297 lawmakers attended the assembly, he said.
The European Union and the so-called troika, comprising the U.K., U.S. and Norway, previously urged Kiir to defer implementing the plan, saying it violates an August accord to end a conflict in which tens of thousands of people have died.
They said issues regarding the structure of the oil-producing country should be addressed during a dialogue on the constitution held by a transitional administration, set to form later this year and include members of the armed opposition.