Home News Presidential candidate suspends campaigns
Facebook
Twitter
Pinterest
WhatsApp
Faith Maureen Kyalya Walube, the only woman in the 2016 presidential elections race has ‘temporarily’ withdrawn her candidature citing irregularities allegedly committed by the Independent Electoral Commission (IEC).
In a two-page letter posted on her Facebook page and addressed to the IEC Chairman Eng. Badru Kiggundu, Ms Walube Kyalya, says the electoral body has already rigged the presidential elections process.
‘As I informed you in the initial presidential candidates’ meeting with the Electoral Commission, the drastic and prohibitive sudden change of the Presidential Elections Act, automatically made the Presidential Elections of Uganda 2016 completely rigged out,’ wrote lawyer Walube Kyalya. 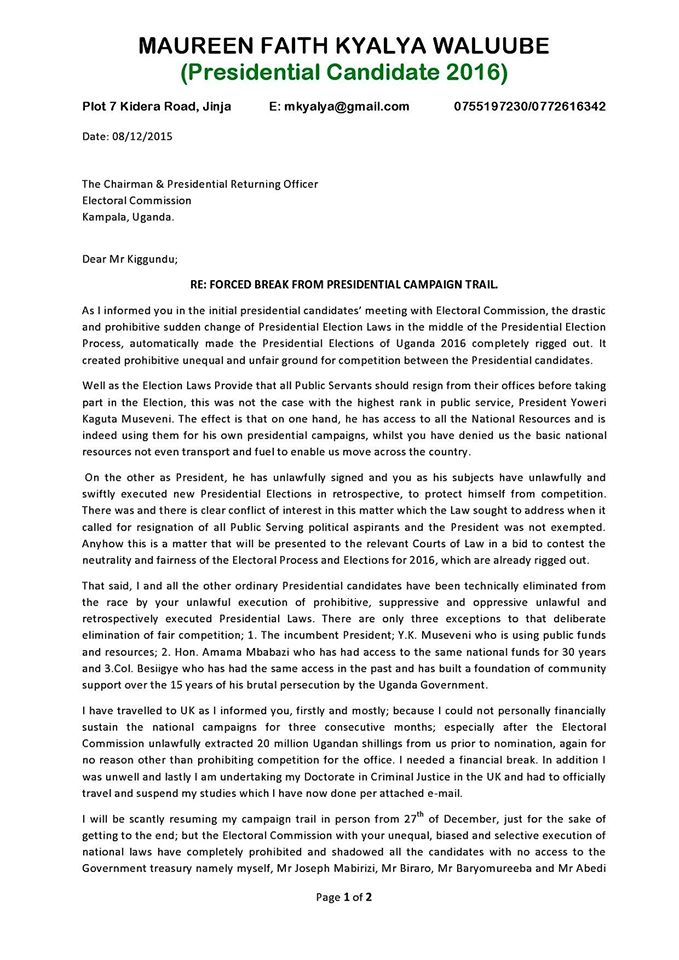 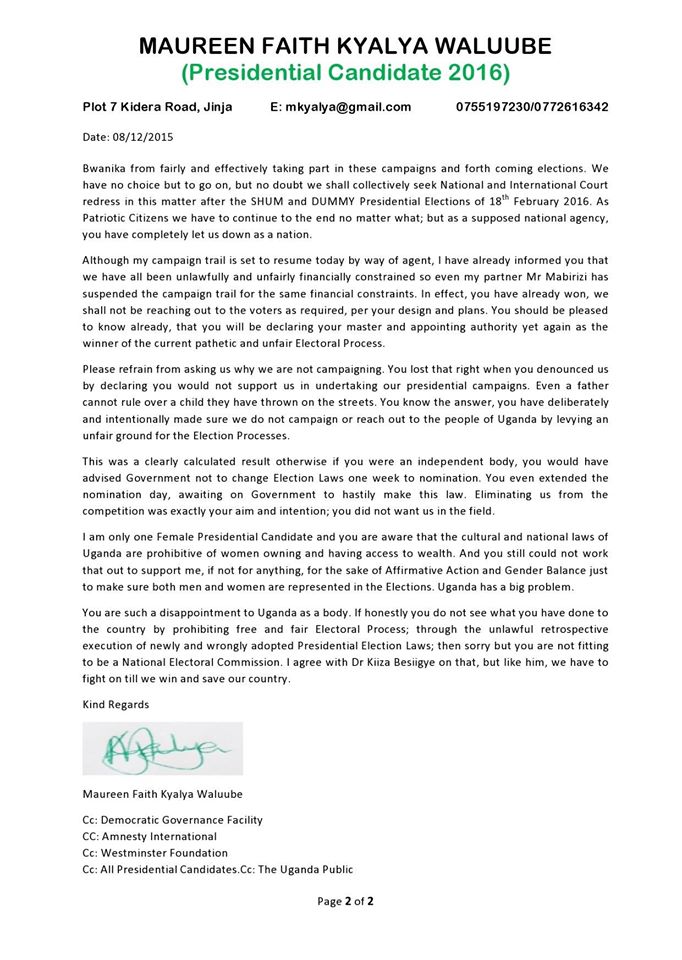 The fiery lawyer also accused the IEC of failing to ensure a level-playing ground for all the candidates, instead choosing to lean towards incumbent president Yoweri Museveni of the ruling National Resistance Movement (NRM) party.
‘Well as the election laws provide that all public servants should resign from office before taking part in the elections, this was not the case with the highest rank in the public service, president Yoweri Kaguta Museveni,’ she wrote in the letter dated December 9, 2015 and promised to follow up the matter with thee ‘relevant courts of law’.
The hitherto controversial Walube Kyalya, a former fiery Forum for Democratic Change (FDC) parliamentary contender in the 2011 elections and also a one time presidential advisor for poverty alleviation in Busoga, says president Museveni is using national resources to run his campaigns, while the IEC has denied the other aspirants transport and fuel to enable them carry out campaigns.
Until recently when she penned the missive dubbed, ‘Forced break from the Presidential campaign trail’ written from an undisclosed location in the United Kingdom, Walube Kyalya has been campaigning alongside Joseph Mabirizi, under the banner of the Independent Candidates Coalition.
In the missive she also indicates that she failed to finance her campaign activities partly due to the fact that the IEC hiked the election fees to Shs20 million.  She however adds that she will resume her campaign trail on December 27.
Contacted on phone earlier today to clarify on the allegations, the IEC Spokesperson Jotham Taremwa said he was in a meeting.
Meanwhile, in an effort to rub it in that the three frontrunners in the 2016 presidential contest are beneficiaries of state resources at different times during the NRM government, Walube Kyalya wrote: ‘That said, I and all other ordinary presidential candidates have been technically eliminated from the race by your unlawful execution of the prohibitive, suppressive and oppressive unlawful and retrospectively executed presidential laws. There are only three exceptions to that deliberate elimination of fair competition; the incumbent president YK Museveni who is using public funds and resources; Hon Amama Mbabazi who has had access to the same public funds for 30 years and; Col Besigye who has had the same access in the past and has built a foundation of community support over the 15 years of his brutal persecution by the Uganda Government’.