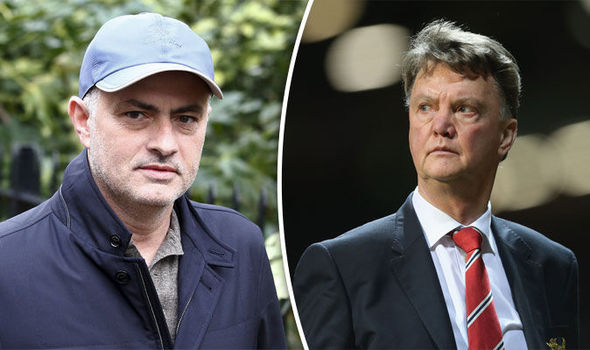 JOSE MOURINHO has agreed a five-year deal to replace Louis van Gaal as Manchester United boss, according to sensational reports from Europe.

Mourinho was sacked as Chelsea boss last Thursday after the champions spiralled out of the control.

The Blues lost nine of their opening 16 Premier League games and Mourinho had admitted the top four was out of reach.

He also claimed his players had betrayed him and his methods following the defeat to Leicester.

But he may not be out of work for long with Van Gaal under huge pressure after going six games without a win at United.

Express Sport understands Van Gaal’s future is being considered with reports suggestingVan Gaal faces the sack if United lose their next match.

They face Stoke – and former striker Mark Hughes – on Boxing Day before Chelsea on December 28.

The fans at Old Trafford chanted Mourinho’s name during the 2-1 defeat to Norwich on Sunday and have grown frustrated with Van Gaal’s methods.

United dropped out of the top four – overtaken by Tottenham – with the club still reeling from their Champions League exit.

On Saturday Mourinho released a statement insisting he wanted to return to the dugout as soon as possible.

“During his career, José has sometimes chosen to leave a club, but only at Chelsea has the club decided that he should leave,” Mourinho’s statement read.

“Each time represents for him the end of a cycle, and the opportunity to start a new one. José hopes that his future after Chelsea this time will be as successful as when he left the club in 2007.

“He will not be taking a sabbatical, he isn’t tired, he doesn’t need it, he is very positive, and is already looking forward.

“Because of his love of football, you will see José at football grounds working and supporting friends.

“He will not be attending any high-profile games because he wants to discourage any speculation about his future.

“José will remain living in London and hopes he and his family will be given the opportunity to do this privately.”

“José will not speak about his current situation for the foreseeable future. He asks the media to respect this decision.”

And reports in Spain, from Fichajes, claim he has already agreed to take the reins at Manchester United after they pull the trigger on Van Gaal.