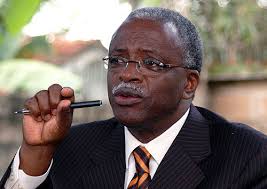 Go Forward presidential candidate John Patrick Amama Mbabazi has protested against the presence of President Yoweri Museveni in Mbale between January 9 and 10, days which were allotted by the Independent Electoral Commission (IEC) to Mr Mbabazi for campaigns in the area.

Through his lawyers Muwema and Company Advocates and Solicitors, Mbabazi alerted the IEC of the hitherto seeming interference with his campaign programme in the eastern town of Mbale by the president.

‘Our client as per his campaign programme which you are duly aware of, shall be holding his presidential campaigns in Mbale on the 9th and 10th of January 2016. A copy of the campaign programme is attached for your ease of reference,’ the lawyers wrote in their communication of January 5 to the EC Chairman Eng Badru Kiggundu titled: Protest against intended presidential candidate Yoweri Museveni’s appearance in Mbale on the 9thand 10th of January, 2016.

But contacted for comment Mr Paul Bukenya, the IEC Deputy Spokesperson, said he was yet to see the letter.

But an analyst conversant with the law said the president enjoys immunity and that Mr Museveni’s presence in Mbale would not contravene the electoral rules.

Media reports indicate that President Yoweri Museveni, who is also the flag bearer of the National Resistance Movement (NRM) in the forthcoming elections, will be in Mbale between January 9 and 10 to commission a number of roads in the Elgon area.

On July 9 last year, after announcing he would contest for presidency, Mr Mbabazi selected Mbale as his first destination, where he was to carry out consultations regarding his candidature.

However, the move did not materialize as he was stopped at Njeru by a team of police officers led by then Director of Operations AIGP Andrew Felix Kaweesi and later taken to Kira Road Police Station where he stayed up to around 8pm before being released.