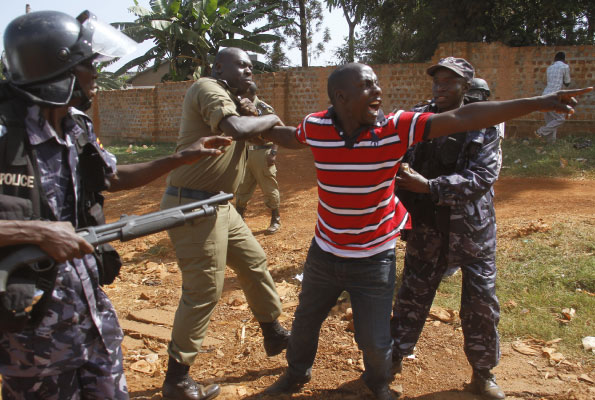 Ritah Babirye Aine, a sister to Christopher Aine, the missing head of Go Forward candidate Amama Mbabazi’s private security detail, has said that the photo of a dead body appearing on social media and carried by one of the local dailies is that of her brother.

Beginning yesterday social media carried a photo of a lifeless man with apparent marks in the chest and broken teeth, and the poster purported the photo was that of Aine, a wanted man who went missing about two weeks ago, prompting police boss Gen Kale Kayihura to put a bounty of Shs20 million on his head.

The media quoted Babirye as saying the marks on the neck and broken teeth appearing in the photo are from an accident he got years ago.

According to news reports, Aine’s sister has asked the police to task the local newspaper to produce the source of the photograph, saying that could provide a lead in the investigations related to her missing brother.

Aine went missing from his home in Kyanja about two weeks ago and, earlier today his relatives in the company of police went to the city mortuary to search for his body but failed to trace it.

However, according to the media, the police spokesperson Fred Enanga has refuted the claims, saying that the photo carried by the newspaper must have been photo-shopped or of another body.

Aine first made headlines mid this year, when he engaged in a vigorous scuffle with police officers who tried to block his boss Mbabazi from addressing supporters in Jinja. At the time Aine was arrested and detained at Nalufenya Police Station in Jinja, a place reserved for hardcore suspects.

Then on December 13 Aine’s name cropped up again, this time linked to a deadly encounter in Ntungamo between supporters of the National Resistance Movement candidate Yoweri Museveni and those of Mr Mbabazi.

In subsequent actions, President Museveni addressed a press conference in Mbale, and said government would deal with those responsible for assaulting his supporters in Ntungamo, while Gen Kayihura followed by putting the 20m bounty on Aine’s head.