In the terse letter dated January 8, Kiwanuka, Karugire Advocates and Solicitors, representing NRM candidate Yoweri Museveni, said that Mbabazi had made it a habit to level unsubstantiated allegations against their client. 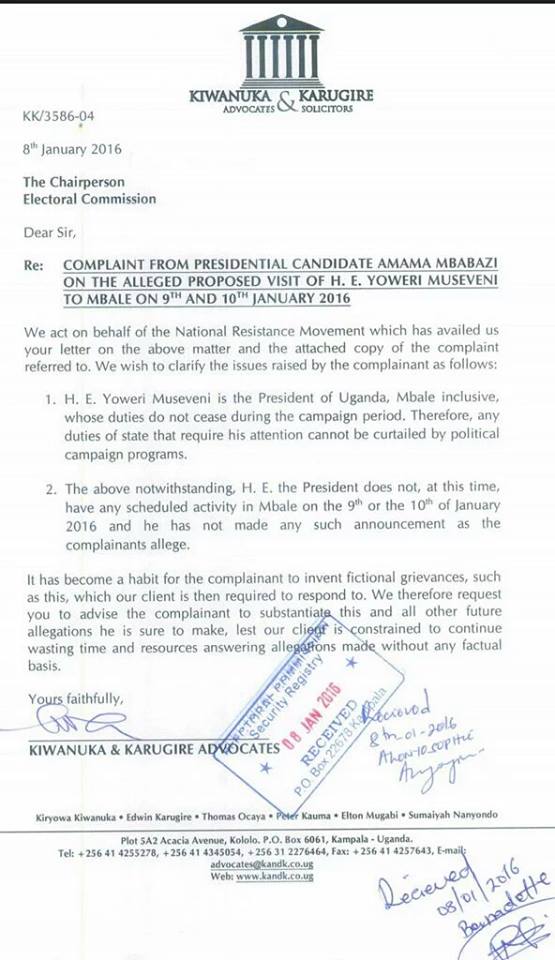 ‘It has become a habit of the complainant to invent fictional grievances, such as this, which our client is required to respond to. We therefore request you to advise the complainant to substantiate this and all other future allegations he is sure to make, lest our client is constrained to continue wasting time and resources answering allegations made without any factual basis,’ the NRM lawyers wrote.

The NRM lawyers were responding to a communication from Mr Mbabazi’s lawyers, Muwema and Company Advocates, who imputed that Mr Museveni would be in Mbale between January 9th and 10th , scheduled days which were allotted to Mr Mbabazi by the IEC to campaign in the Elgon region, in contravention of the electoral rules.

But according to the NRM lawyers, their client does not have any scheduled activity in Mbale on the said days.

‘The above notwithstanding, HE the President does not, at this time, have any scheduled activity in Mbale on the 9th or the 10th of January 2016 and he has not made any such announcement as the complainants allege,’ the president’s lawyers wrote.

However, despite clarifying on Mr Museveni’s presumed presence in Mbale, the NRM lawyers stressed that Mr Museveni is the President of Uganda and that his duties cannot be disrupted by campaign activities.

‘HE Yoweri Museveni is the President of Uganda, Mbale inclusive, whose duties do not cease during the campaign period. Therefore, any duties of state that require his attention cannot be curtailed by political campaign programmes,’ wrote the lawyers of Kiwanuka Karugire Advocates and Solicitors, whose two principal partners are Kiwanuka Kiryowa and Edwin Karugire, a son-in-law to President Museveni, the NRM flag bear for theFebruary 18, 2016 elections.