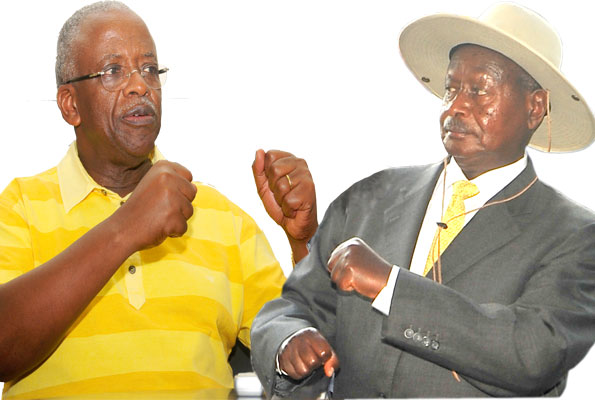 Mr Mbabazi, a former Prime Minister and close ally of Mr Museveni for most of their political journey that spans back to 1973, made the remarks early today, while fielding a question and answer media session with journalists at the Mt Elgon Hotel Mbale.

Mr Museveni, Mr Mbabazi and six other candidates including the Forum for Democratic Change flag bearer Dr Warren Kizza Besigye are contesting for presidency in the 2016 elections slated for February 18.

‘He needs to listen to my advice; it is that old man with a hat please retire,’ Mbabazi said a day after the NRM lawyers wrote to the Independent Electoral Commission (IEC), protesting against some of Mr Mbabazi’s taunts against the NRM candidate, Mr Museveni.

On Thursday this week Mr Mbabazi’ lawyers wrote to the IEC complaining that Mr Museveni planned to be in Mbale between January 9 and 10, days that were officially allotted to him to campaign in the Elgon area, and at the session today he also took swipe at the response made by NRM candidate Mr Museveni’s lawyers, Messrs Kiwanuka and Karugire Advocates and Solicitors.

‘The arrangement is that when a presidential candidate is in an area he has exclusive rights; I saw a letter written by Karugire and someone else; they used uncouth language and I don’t know who can use that language,’ Mr Mbabazi said, in apparent reference to the principals of the law firm.

‘It has become a habit of the complainant to invent fictional grievances, such as this, which our client is required to respond to. We therefore request you to advise the complainant to substantiate this and all other future allegations he is sure to make, lest our client is constrained to continue wasting time and resources answering allegations made without any factual basis,’ the NRM lawyers wrote.

The lawyers further informed the IEC that Mr Museveni has no planned activity in Mbale on the said dates of Mr Mbabazi’s campaigns in the Elgon region.

However, despite denying the allegations regarding Mr Museveni’s presence in Mbale between January 9 and 10, the NRM lawyers stressed that Mr Museveni is the President of Uganda and that his duties cannot be disrupted by campaign activities.

‘HE Yoweri Museveni is the President of Uganda, Mbale inclusive, whose duties do not cease during the campaign period. Therefore, any duties of state that require his attention cannot be curtailed by political campaign programmes,’ a statement from the lawyer firm indicated.

Lawyer Edwin Karugire is Mr Museveni’s son-in-law and together with his principal partner Kiwanuka Kiryowa, own the law firm Kiwanuka and Karugire Advocates and Solicitors.

The battle of words between the NRM and Go Forward teams has been escalating since December 12, when supporters of the two political organisations clashed in Ntungamo.

In the ensuing days police mounted a search for those who reportedly orchestrated the violence, and one of the people police sought was the now missing Christopher Aine, the head of Mr Mbabazi’s private security detail.

And today in Mbale, while speaking about Aine’s ‘disappearance’, Mr Mbabazi put the Police on notice.

‘Has the police identified a body that was floating (on the shores of Lake Victoria); I don’t want to spend much time on that; Aine was arrested by some people I don’t know; let us wait for the court process. I think police should not make public statements. I think there is a court process; I have been seeing comments from Mr Enanga,’ Mr Mbabazi said.

The Go Forward candidate also took time off to talk about his earlier campaigns in the greater Eastern and north eastern region including Karamoja, and in Mbale, where he will campaign tomorrow.

‘I am very happy with the reception in Karamoja; and there has been this nonsense that we are not in rural areas like Karamoja. Karamoja is the only area where we have eight unopposed leaders,’ he said adding: in Kumi and Bukedea the support was enthusiastic but the mobilization wasn’t all that well.’

Mr Mbabazi further said: ‘I will be announcing something new here in Mbale tomorrow; it is not concrete but it will help’.

He also hinted at the intermittent cases of intimidation, allegedly carried out by the ruling party.

‘This thing of intimidation is destructive and the state is intimidated; why do you arrest an 83 year-old man, giving his views? I wonder who is intimidated; is it the old man or the state? He asked and added: ‘I don’t know who the leopard is but I keep telling people that the power is theirs’.