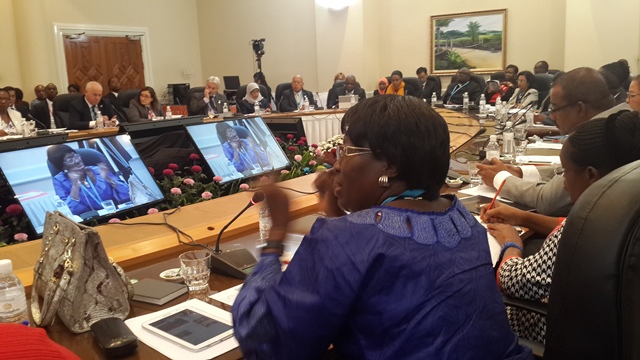 Speakers and Presiding Officers have been tasked to ensure they uphold the independence of their respective legislatures against interference from other organs of state.
Addressing the 23rd conference of Speakers and Presiding Officers of the Commonwealth in Kota Kinabalu, Malaysia, Uganda’s Speaker of Parliament Rebecca Kadaga noted that the operations of legislative institutions in most of the Commonwealth countries have been suffering due to the interference by the judicial process.
‘’The organs of the State are different and have independent specified functions.  It is within the power of the legislature to exercise all functions conferred upon it. There are functions conferred on the Judiciary and the Executive by the Constitution which they are expected to perform in accordance with the Constitution,’’ Rt Hon Kadaga said.
Kadaga, who was contributing to a Keynote address on parliamentary privilege by the Speaker of the National Assembly of Zambia, Justice Dr Patrick Matibini, reiterated that the effective functioning of democracies depends heavily on the duty of the Speakers to remind MP of the powers and privileges that govern them.
The Speaker of the Rwanda National Assembly, Donatille Mukabalisa, re-echoed the need for Parliament to exercise its mandate without the fear of interference from political parties and the Executive.
The Speakers however, cautioned that even with Parliamentary privilege in place, it is also a duty for the MPs to protect the general interest of the nation and public.
Meanwhile, conference participants resolved to help MPs participate in plenary debates without fear of being sued or prosecuted.