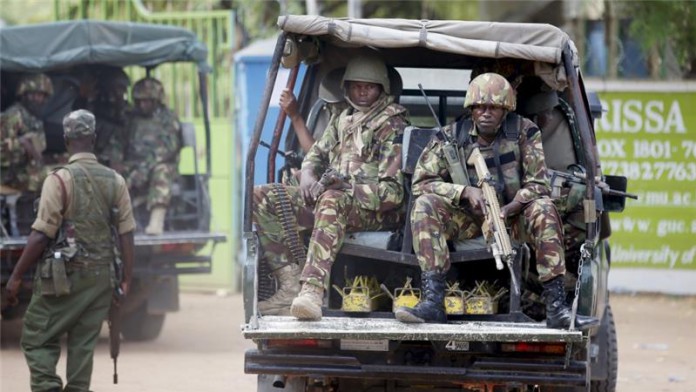 Kenya’s military carried out air raids on al-Qaeda-linked militants in southwestern Somalia after an attack on an African Union military base January 15 in which the Islamists said at least 100 Kenyan soldiers died.

The Kenya Defence Forces used both land and air forces in response to the attack on the El Adde base in Somalia’s Gedo region near the Kenyan border, Samson Mwathathe, the head of Kenya’s military, said in a statement published on the Ministry of Interior’s website. The operation is ‘delicate’ because some Kenyan soldiers have been captured and are being used as human shields, he said.

“As we speak right now our troops are engaging the terrorists,” Mwathathe said. “We have information to the effect that some soldiers are being used as human shield and we will not allow any further casualties.”

Al-Shabaab, an Islamist militant group that has been fighting Somalia’s government for a decade, said it killed more than 100 Kenyan soldiers and captured 12 others in the Jan. 15 attack. If the death toll is confirmed, it would be the highest number of casualties Kenya’s military has suffered in a single incident since its troops invaded southern Somalia in October 2011.

The African Union is still verifying the number of casualties and Kenyan authorities haven’t specified how many of its soldiers died.

The El Adde attack was carried out by suicide bombers using improvised explosive devices on vehicles and “the soldiers affected by the attack are a company size force,” Defence Secretary Raychelle Omamo said in a separate statement on the Ministry of Interior’s website.

In a related development, the air raid that started on yesterday is not an isolated case; in April last year, the Kenyan military carried out airstrikes against the Al Shabaab militants following the attack on Garissa University College in which 147 students were killed.