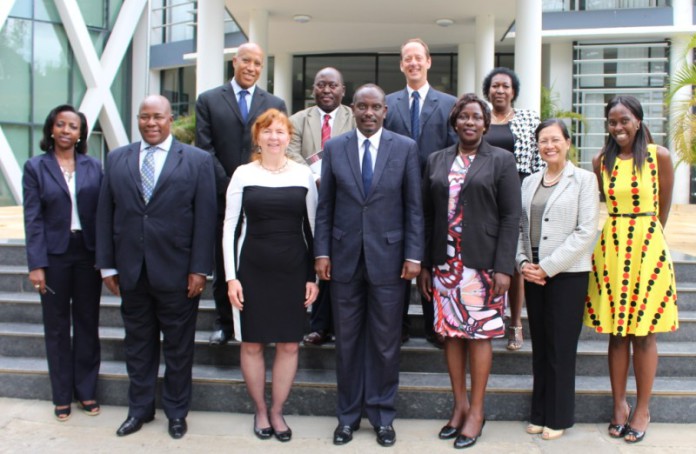 The new Deputy Mission Director of Kenya and East Africa for the United States Agency for International Development (USAID) Ms Candance Buzzard has paid a courtsey visit to EAC Secretary General Dr Richard Sezibera at the EAC Headquarters in Arusha.
While receiving Ms Buzzard, Dr Sezibera thanked USAID for its continued support and strong partnership, and reiterated the importance of integration as a means to access regional markets and gain competition advantages in efficiency and productivty outputs.
“These elements can only be realised by having no restrictions on the movement of goods, services, labour and capital within the East Africa,“ Dr Sezibera noted.
Ms Buzzard was accompanied by Mr. Matt Rees, Deputy for Trade Africa, Mr. Donald Keene, Resident Legal Officer and Ms. Cristina Olive, Office Director, Strategic Planning and Anaylsis.
The visit constituted of a presentation of the draft USAID Regional Strategic Plan 2016-2022 to the Secretary General, and dialogue on ways in which the two organizations can align their key priorities for the next five years.
USAID’s five-year strategic plan will focus on increased trade, investment and food security; health services and systems for marginalized and vulnerabe populations; increased security of populations vulnerable to regional threats and strengthening East African institutions’ leadership and learning.
Ms Buzzard acknowledged the efforts that the Community has made for some of the region‘s most remote regions to access trade, adding that “this has not only promoted prospertiy in those regions, but has also delivered better livelihoods to their communities, thus putting EAC in the forefront as a model for Integration.“