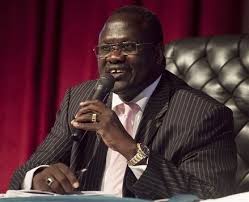 South Sudan rebel leader Riek Machar Teny has softened his stance on the abolition of the 28 new states created by President Salva Kiir, and now instead says the formation of a unity government is possible after his troops enter Juba in three weeks time.

Previously, Machar, a former Vice President, had said he would not join the Government of National Unity (GNU) if the presidential instrument creating the 28 states is not revoked, but in a recent exclusive interview with Al Jazeera, he said the lead mediators, the Intergovernmental Authority on Development (IGAD) Council of Ministers, had ‘changed sequence’ on the matter, a position he would follow.

‘I think that IGAD Council of Ministers have now changed the sequence of the road map to the formation of the transitional government of national unity. We will now form the government after Juba is demilitarised and our troops go in. So the sequence is slightly changed, we think this is good,’ Machar, the leader of the Sudan Peoples Liberation Movement in Opposition (SPLM-IO) said, adding that the issue of the 28 states would now be shelved for a month after the formation of the GNU.

He also called for international assistance to ensure that the South Sudan capital Juba is dimilitarised and a joint integrated force comprising rebels and government soldiers is effected.

‘We will prepare ourselves and our troops to go to Juba to form the joint integrated security force. In total 2,910 of our troops will be going to Juba and the government will have nearly 3,000 troops, then the rest will go out of Juba. After that, we can start forming the government of national unity’ he said.

Probed further on his commitment to the formation of the GNU Machar, said: ‘I want to be in Juba. I want the government of national unity to be formed as soon as possible. All we need is to ensure that the obstacles that were creating difficulties for us are removed. There should be no reason to delay the formation of the transitional government of national unity. Once Juba is demilitarised – the troops that are supposed to take over the security of the city are deployed from both sides – then I will be in Juba. Juba is my home’.

In August last year, under the mediation of IGAD, the rebels signed an agreement with government, paving the way for a unity government after almost two years of civil strife that has killed thousands and left hundreds of thousands displaced.

Since then a series of reciprocal peace overtures have been ongoing including the return to Juba of an SPLM-IO advance team and the sharing of ministerial posts.

However, the contentious issue of the creation of the 28 new states is still haunting the world’s newest state, created in 2011.