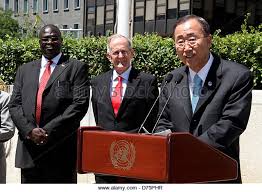 UN Secretary General Ban Ki Moon is expected in the South Sudan capital, Juba, Thursday, his second visit since the country gained its independence in 2011.

Machar, the South Sudan Vice President designate, has reportedly said he will only travel to Juba to form a national unity government when nearly 3,000 of his troops and police are in the capital, with a further 1,200 police deployed to Bor, Malakal and Bentiu.

South Sudan’s information minister, Michael Makuei, said the government would update the UNSG about the efforts being made in the implementation of the agreement up to this moment. He also added that the SG will be informed ‘about the role of the United Nations Mission in the Republic of South Sudan (UNMISS) and what they are doing’.

“The government of the Republic of South Sudan highly welcomes the visit of the Secretary General because this is where he will get the real facts on the ground. It seems very clear he is expressing his disappointment but it seems it’s not clear to him who is responsible for the delay in the implementation of the agreement,” Makuei added.

He also said another condition being made by Machar is there must be conducive atmosphere in Juba before his return to the capital but hastened to add that the vice-president designate is not the one to determine when conditions are conducive in the capital.

Former Botswana president Festus Mogae, who is chairperson of the Joint Monitoring and Evaluation Commission – the head of an international group monitoring South Sudan’s peace process – told the UN Security Council last Friday he will propose security arrangements to spur the return of rebel leader Machar as vice president.

Mogae said the return of Machar is a critical step to launching a national unity government that would eventually deal with South Sudan’s rising violence and ‘humanitarian catastrophe’.

He also pointed to a worrying escalation of fighting in Western Bahr El Ghazal and Western Equatoria.

Mogae said the large deployment being requested by Machar does not comply with a prior agreement on security arrangements.

“I plan to offer a compromise proposal on security arrangements for Juba sufficient to ensure security for Dr Machar to return, and which would consequently allow for the formation of the transitional government,” Mogae said.