The sources tell EagleOnline , he has had NO contact with any state operative neither does he feel threatened and in fact changed his number a few hours back to avoid being disturbed or tracked by operatives.

Gashumba helped us break the story via his Facebook timeline…. “Happiness is killing!!! My source in State House tells me that some artist who performed in the Tubonga Nawe Song reported Semunju Nganda, Kasuku of Dembe FM and Frank Gashumba to the President. That it is us who are giving them sleepless nights by urging Ugandans to boycott their shows and concerts. If you know what you did was very right Now what will President Museveni do to me? 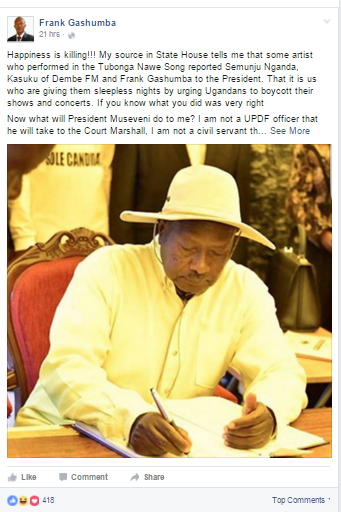 Kasuku told EagleOnline he and Gashumba had communicated before the Facebook status update and said it was absolutely not an ambush considering they also intend to visit besieged former presidential aspirant Dr Kiza Besigye in Kasangati together.

“These people are simply not serious.  So Bebe Cool reported me to Sevo (President Museveni)? Hehe interesting times wabula. Someone should tell the President to also be serious and stop listening to nonsense,” Kasuku roared.

But our sources say in no way did is he a threat to national security and President Museveni can’t be bothered by a simply radio gossip monger.