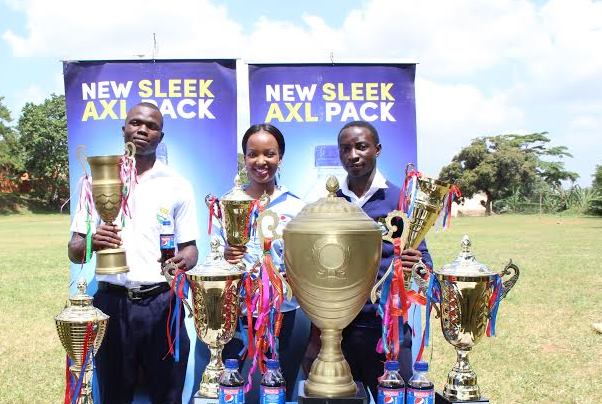 Crown Beverages Limited under the Pepsi flagship brand has offered Ug.shs 5 M towards the smooth running for the third edition of the Uganda Muslim Education Association (UMEA) Schools Solidarity Games.

Handing over the package at Kibuli S.S on Tuesday, Pepsi Brand Executive, Tracy Kakuru noted the Beverage company is proud to be associated with the Games for the second time running.

“We are delighted and proud to be associating with the UMEA Games for the second year running” Kakuru told the media.

The package will be in cash, 150 crates of soda, public address system and tents.

‘I thank Pepsi for this offer which is timely. In line with the Games’ philosophy of celebrating God’s favour unto humanity, we hope these games help our country realize the sporting dreams that we cherish’ Hajji Kiteezala said.

Kiteezala further highlighted of the significance of the games whose main aim is to foster unity, offer the a fertile ground for talent spotting and the popularization of Muslim founded schools in Uganda.

At the same event, Kibuli S.S head master, Hajji Ali Mugagga Kasule gave a detailed recount of the games that started way back in 1998.

He is glad that Kibuli S.S is still part of the games that were started at the same institution.

He also appealed to all stake holders to fully rally behind the organizing committee to have a successful event.

‘Come and support the UMEA Games. I thank the press for the continued coverage. I appeal to all stake holders to join hands and have a successful event’ he said.

Masaka S.S is set to host this year’s championship that will have netball, volleyball and football.

For the first time in the history of the games, women football will be played.

A record 75 schools have expressed interest to participate in the games.

22 schools from the Masaka region have already confirmed participation.

In a related development, unlike the previous editions, distant up-country schools from as far as Kasese and Yumbe are expressed interest.