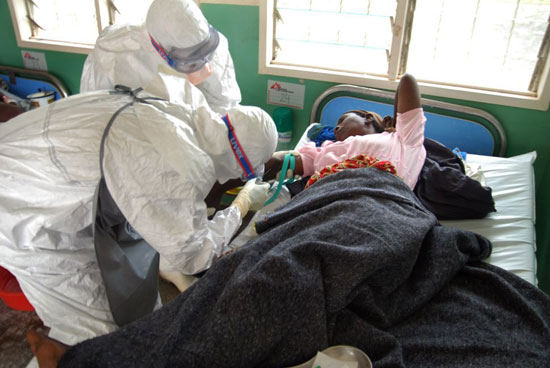 There is an outbreak of the Rift Valley Fever in Kabale district, Western Uganda, the Ministry of Health say. This declaration follows laboratory tests done at the Uganda Virus Research Institute (UVRI) which confirmed two samples positive of this infectious viral haemorrhagic fever.

Preliminary reports from the district further indicate that three new suspect cases have been identified and their blood samples are yet to be tested.

No deaths have been recorded since the onset of the outbreak on 4th March.

The second confirmed case is of a 19-year-old student from Kabale town who had contact with livestock and other domestic animals at their family home. He reported to Kabale Regional Referral Hospital on March 3rd 2016 with signs of a Viral Fever. He is currently admitted at the hospital isolation ward. Investigations indicate that the two cases do not have any epidemiologic link.

As of March 15th, three new suspected cases have been reported. One is a 75-year-old male from Rubaya sub-county, Kabale district who was recently discharged from Kabale RRH following his admission with haemorrhagic symptoms. The second is an 11-year-old boy from Upper Bugongi, Kabale town while the third suspect is currently admitted at Rugarama Hospital in Kabale district.

Rift Valley Fever is an acute, fever causing viral disease that affects domestic animals (such as cattle, sheep, goats and buffalo, camels) and humans. It is most commonly associated with mosquito-borne epidemics during years of unusually heavy rainfalls. A person suffering from Rift Valley Fever may have either no symptoms or a mild illness associated with fever and liver abnormalities. However, in some patients, the illness can progress to haemorrhagic fever, inflammation of the brain which can lead to headaches, coma or seizures or eye disease.

People who become ill usually experience fever, generalised weakness, back pain, dizziness and weight loss at the onset of the illness. Typically patients recover within two days to one week after onset of the illness. Approximately 1% of people that become infected with the Rift Valley Fever die of the disease.

In animals, the disease is characterized by abortions, occasionally bloody nasal discharges in mature animals, haemorrhagic diarrhoea and jaundice. There is high morbidity and mortality in young animals.

The disease is transmitted from animals to humans through close contact with infected animals and their products such as milk, meat and body fluids.

Animals become infected with the disease through the bites of infected mosquitoes. Other insects that can transmit the disease are ticks and biting midges.

Rift Valley Fever is an important Notifiable and Zoonotic Disease. The disease has never been reported in humans and animals in Uganda before this outbreak. Prevention and control of this disease in animals relies on maintaining a strong surveillance system. In case of outbreaks, appropriate biosecurity and biosafety measures must be exercised.