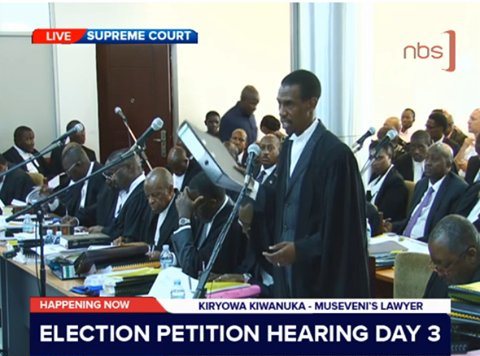 As Uganda went to the polls on Febraury 18th,  voting across most of Kampala and Wakiso districts started as late as 3pm as voting materials arrived way later than the scheduled opening of polling at 7am, forcing the Electoral Commission [EC] to extend the deadline from 4pm to 7pm.

Across polling stations in Kampala and Wakiso, voters started queuing as early as 6am, heeding to advice by the electoral body and Opposition politicians to flock to polling stations promptly and beat the 4pm deadline.

Fast forward to the presidential election petition, President Museveni’s lawyers have defended the Independent Electoral Commission during the morning session of day three saying  there’s no single piece of evidence suggesting that any voter didn’t vote because of delay of voting materials.

NRM lawyer Kiryowa Kiwanuka in his presentation said that the EC started distribution of voting materials with the farthest points according to the schedule but insisted it was not a  trick or favour for a particular candidate.  “It’s true there was late delivery of voting materials in Wakiso, Kampala but not true to say it was intended to benefit any candidate,” he reasoned while responding to evidence and submissions of Amama Mbabazi’s lawyers.

The first respondent’s (Museveni) lead lawyer led Didas Nkurunziza also told court that the petitioner didn’t have any evidence to show that their client candidate Yoweri Museveni had solicited for votes by giving out money and hoes.

“There is no evidence that 1st respondent, as candidate, gave out hoes. Therefore, allegation is not proved,” Nkurunziza said. In his affidavit, my client Museveni vowed that he didn’t personally give out UGX250,000 per village with intent to induce voters to vote for him but instead the money was for party activities as no political party can survive without financing officials.”