President Yoweri Museveni has told the newly elected Members of Parliament that they should not expect a salary increment as it is the norm at the beginning of every new Parliament.

Museveni instead urged MPs to help their country by promoting wealth creation at the household level through production and not through handouts.

“He made it clear to the MPs that there would be no salary increment for public servants including the Members of Parliament. He agreed to meet them in different zones twice in a month to talk about the issues affecting their areas”reads the statement sent by Presidential Press Secretary Linda Nabusayi.

He said that household wealth creation is the most crucial issue that will help promote food and income security and also assist legislators themselves to have long political lives.

“Our main focus should be to change the families whether there is a road or not,” he remarked.

He made it clear to the MPs that there would be no salary increment for public servants including the Members of Parliament. He agreed to meet them in different zones twice in a month to talk about the issues affecting their areas. He encouraged them to concentrate on helping families and homesteads in creating wealth because it is the most crucial issue that will reduce and alienate poverty in the nation.

The President told the newly elected MPs currently attending a one-week NRM retreat at the National Leadership Institute in Kyankwanzi, to exploit the NRM manifesto to understand the challenges being encountered and the possible interventions to those challenges.

He informed the MPs that the solution to increased land evictions in the country is for the legislators themselves to get involved and collaborate with Resident District Commissioners (RDC), together with the Vice President, Prime Minister and the Minister for Presidency, so that peasants can settle on their pieces of land peacefully and develop themselves.

He warned that if there were magistrates who collude with the landlords, he would personally talk to the Chief Justice to see that they are dealt with. He strongly urged the MPs to stop sending the peasants to court because they don’t have fees for court proceedings and sessions. 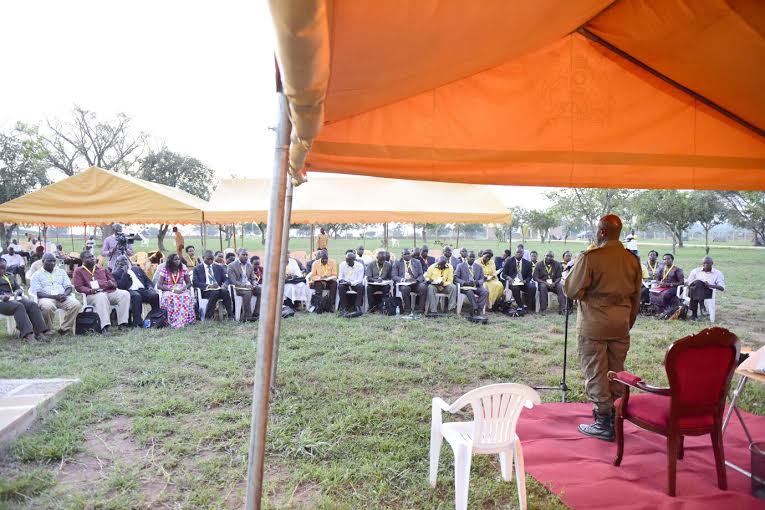 “The peasants cannot afford court fees, this is the job of MPs and RDCs,” he said.

On Universal Primary and Secondary Education, Museveni said some local elites had started charging fees which the parents cannot afford. He suggested that the solution to the problem is to create village assemblies where the parents, PTAs (Parents and Teachers Association) as well the opposition come to a consensus on whether they can afford to pay the money or not.“The local elites say children cannot study without lunch, all this is being done without discussion, let us discuss it at every village level,” he said.

On the issue of electrification, he said that the party was carrying out the project systematically and that the next move was to take the electrification project to constituencies. He said government had successfully supplied power to almost all the districts, remaining with only four districts.

The President noted that much as government was spending a lot of money on road construction, it is committed to work on the issues of the teacher’s salaries such that the ongoing conflicts can stop. He added that after allocating money for the roads and teachers, the rest of the money would go into NAADS, micro finance, youth, women and innovation funds.