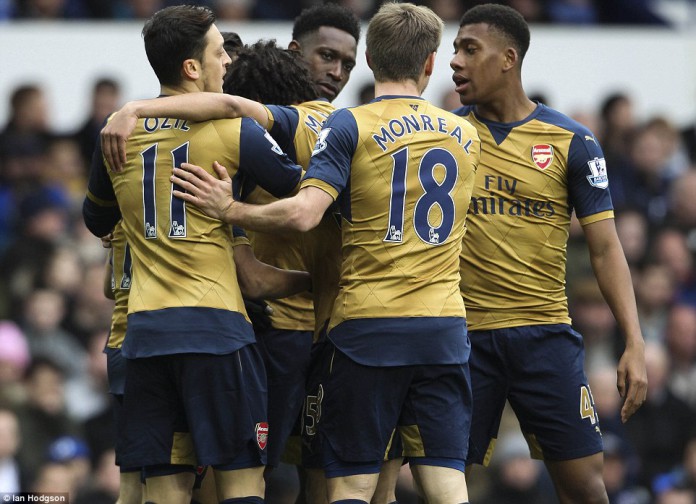 Arsene Wenger insists Arsenal can still win the Premier League title after their 2-0 victory over Everton on Saturday.

The Gunners, dumped out of the Champions League and FA Cup over the past week, eased to a much-needed win at Goodison Park courtesy of goals from Danny Welbeck and Alex Iwobi.

They remain well adrift of leaders Leicester in third with eight games left of the season, with the Foxes eight points clear of them ahead of their trip to Crystal Palace later on Saturday.

But Wenger is convinced they can make up the ground on Leicester and second-placed Tottenham and go on to snatch the title, telling BT Sport: “We are still in it in our minds and mathematically, yes, and we want everyone to be behind the team to give us a chance. We are ready for a battle.

“Why should it be a two-horse race with one team [Tottenham] three points in front of us? Let’s focus on performances and after that we will see how we finish.”

Arsenal were far superior to Everton as they claimed their first league win in four games.

The north Londoners were barely troubled throughout the 2-0 win, and Wenger praised the character of his players following a difficult week for the club.

“I feel the quality of our performance was top – mentally, technically, tactically we were in control of the game,” said the Frenchman.”We knew we had to start strong and try to be in front half-time because Wednesday night to Saturday morning was very short [turnaround between games]. Overall we had a very convincing performance.

“The character was questioned many times and I want them absolutely to be rewarded because they have an exceptional attitude. I don’t question their character.”