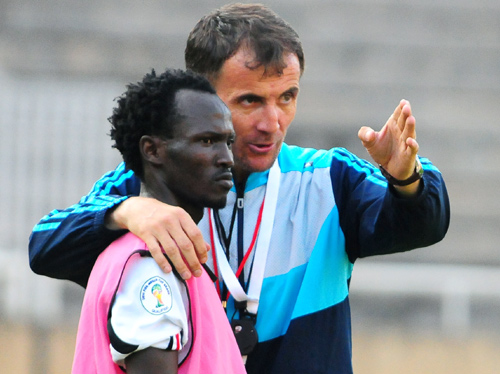 There were no surprises in the final squad announced by Uganda coach Milutin ‘Micho’ Sredojevic traveling for the Afcon 2017 qualifier against Burkina Faso on Saturday.

Youthful El Merrick goalkeeper Salim Jamal and teenage PROLINE FC striker Idris Lubega did not make the cut in a squad that is largely made up of players who did duty for Uganda in the previous 3-0 win over Togo in qualification to the 2018 World Cup group qualifying stage in November.

Sonderjsyke (Denmark) striker Emmanual Okwi has another chance to revive his international career after making the final 18 while goalkeeper Denis Onyango who had been held up in Congo Brazzaville due to travel restrictions also makes the team.

Skipper Geofrey Massa will be joined by, Standard Liege forward Farouk Miya, Okwi and Hamis ‘Diego’ Kiiza in the hunt for goals. Cranes are top of their group on maximum points, following successive wins over Botswana and Comoros. They leave for Ouagadougou which is approximately 3988 kilometres or 2478 miles on Thursday aboard Ethiopian Airlines.