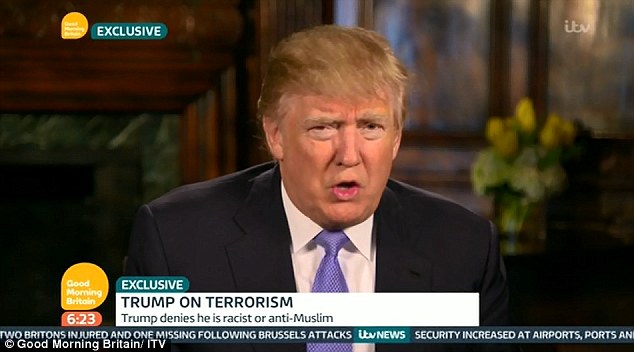 Donald Trump condemned Muslims today for failing to report suspicious activity within their own communities – insisting they must do more to help prevent attacks such as those in Belgium.

The US Republican presidential candidate said it was ‘a disgrace’ that a suspect behind last year’s Paris attacks had been found after a long manhunt by police in an area of Brussels where he lived.

Mr Trump, who wants a ban on Muslims entering the US, condemned the ‘outrageous’ attacks on the Brussels airport and metro yesterday and said he would ‘hit ISIS so hard you wouldn’t believe it’.

But a London police chief hit back at Mr Trump’s remarks this morning, saying he was ‘wrong’ to blame Muslims for failing to report extremists.

In the interview by DailyMail.com U.S. Editor-at-Large Piers Morgan, Mr Trump told of his fury that Paris attacks suspect Salah Abdeslam had been living in his local area of Brussels for four months.

‘He was in his neighbourhood where he grew up and nobody even turned him in and supposedly this is retribution for that. It’s a disgrace,’ he said.

Mr Trump is the front-runner in the race to be the Republican candidate in November’s presidential election despite making a series of hugely controversial statements during his campaign.

These have boosted his popularity with supporters who see him as someone who speaks uncomfortable truths, but have outraged millions both in the US and around the world.

Mr Trump said there were signs that an attack by suspected Muslim extremists in California in December, which killed 14 people, could have been stopped.

‘A lot of people in the community knew they were going to do it because in their apartment they had bombs all over the floor… and they didn’t report them,’ he said.

‘I don’t know what it is. It’s like they’re protecting each other but they’re really doing very bad damage. They have to open up to society, they have to report the bad ones.’

Mr Trump added: ‘Everybody from that area knew he was there and nobody turned him in. There’s something going on, and there’s something wrong – you know it Piers, and so do I.’

Mr Trump told Mr Morgan – who said he considered the billionaire ‘a good friend’ he had known for a decade – that he did not believe many Britons were scared of the idea of him in the White House.

He said: ‘I don’t think too many are. Honestly, I’m a very normal person. I happen to be intelligent, very intelligent, I guess, based on certain results that I get in doing things.

Yesterday, Mr Trump commented on the bombings hours after they happened, saying: ‘This is going to happen in the United States.’

He then said in an interview on Fox News that the US needs to ‘shut the borders’ – a statement he repeated later in the morning while appearing on NBC’s The Today Show.

In that appearance he also told presenter Matt Lauer that he is a firm believer in using torture to get information from people behind attacks like the one in Brussels, stating: ‘Waterboarding is fine.’

Mr Trump also called into Fox Business Network’s Mornings with Maria Bartiromo saying that the US must have surveillance of Muslims in this country, particularly at mosques.

The series of bombings in the Belgian capital – which occurred in the city’s airport and at a Metro station close to the headquarters of the European Union – have claimed the lives of at least 34 individuals. ISIS has since claimed responsibility for the attacks in a statement.

Mr Trump previously called Brussels a ‘hellhole’ in January when asked about the city during a Fox Business interview.

The New York Times contacted Mayor Yvan Mayeur in the wake of that comment, who told the newspaper: ‘We don’t react to Mr Trump’s comments. Have a nice day.’